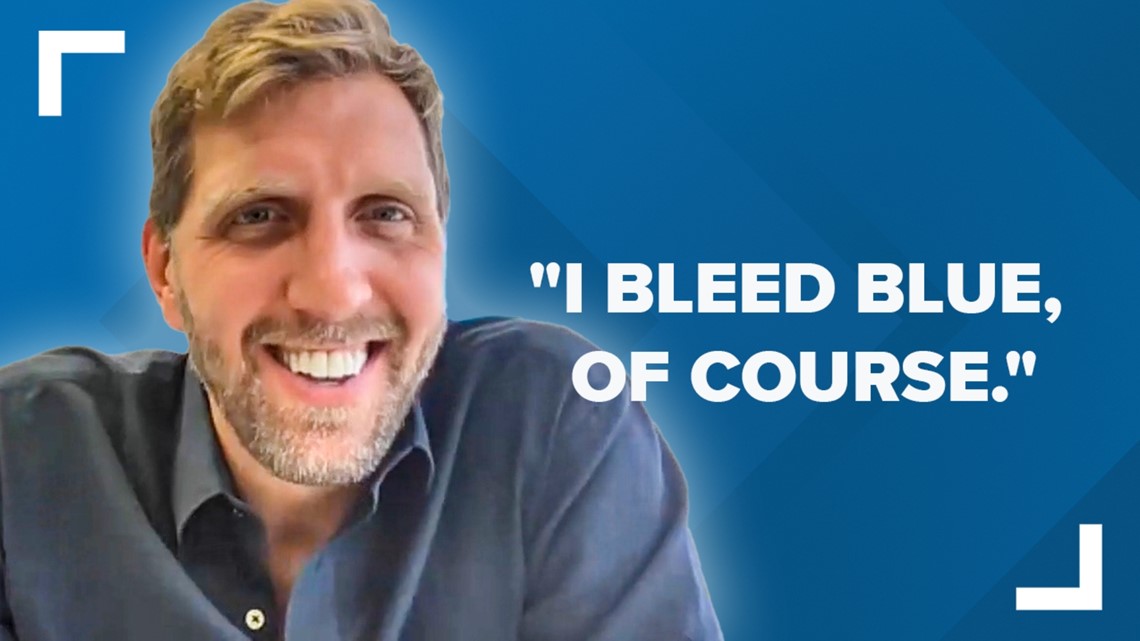 While Nowitzki said he enjoyed spending his early retirement years traveling and spending time with his family, he plans to be closer to the Mavs in the future.

DALLAS — As Mavs legend Dirk Nowitzki continues to figure out what comes next in his retirement, he’s also becoming more involved with the Mavericks organization and the city of Dallas.

“I’m a huge tennis fan,” Nowitzki said. “Tennis was my first sport. With the Dirk Nowitzki Foundation, we wanted to organize our own event with something we love.”

The tournament will take place from 11 a.m. to 3 p.m. with tickets costing $41 and children three and under will enter free. To buy tickets, click here.

Proceeds benefit the Dirk Nowitzki Foundation, which annually awards grants to organizations focused on the welfare, health and education of children. The former Mavs forward started the foundation in 2001.

“I’m not a big golfer, so I wanted to put in something that I enjoy doing,” Nowitzki said. “We invented this celebrity tennis classic and unfortunately, of course, we haven’t been able to do it for the past two years due to the pandemic. But we’re back for the fifth year and we’re really looking forward to it. be there. It’s going to be a fun Sunday weekend at SMU.”

Nowitzki said he was happy to have Doncic back involved and playing in the tournament.

“We like having him,” Nowitzki said. “Of course he’s the star here. People love him. I wouldn’t say he’s the best tennis player. He’s a huge tennis fan. But we’re so happy and grateful that he come and support. He had just played EuroBasket in Europe. And for him to come and support this weekend means a lot to us. We really appreciate him playing.”

Nowitzki made his NBA debut on February 5, 1999. Another professional who came onto the scene around the same time was Swiss tennis legend Roger Federer, who played his first Grand Slam tournament at Roland Garros on May 25, 1999.

Federer recently announced that he will be retiring from professional tennis after a tournament in London.

“I’ve met Roger a few times,” Nowitzki said. “Once at the Olympics in 2008. And a few other times at Wimbledon. Of course I’m a very, very big fan. I just talk to him, I’m looking for his brain. What he’s done off the court too like on the pitch. For me, he’s one of the goats of the sport, of course.”

“To lose Serena and Roger in just a few weeks is very sad and emotional for me, as a tennis fan, who has followed the sport for 40 years. They will certainly leave a huge hole to fill, but both have huge personalities. They have does so much good off the pitch.”

Nowitzki was recently honored at EuroBasket 2022 in September, where his No.14 international jersey was retired. It’s the first time in the German Basketball Federation’s (DBB) 73-year history that they’ve retired a jersey number.

“It was super cool,” Nowitzki said. “It was emotional. I had friends growing up there. I had my family. My kids were there. My parents got to witness it again. There were so many unforgettable moments, honestly those three past few years starting with street naming here and then jersey retirement and all sorts of other rewards it’s just been an amazing journey here for three years just soaking in and trying to enjoy of the moment. I’m so proud that my family is here to witness all of this.”

Last season, the Mavs proved to their fans and to themselves that they could compete with the best in the league. The whole league noticed what they did in Game 7 against the Phoenix Suns – the only NBA team to 60 wins this year.

The season ultimately ended in a loss as the Golden State Warriors knocked the Mavs out of the playoffs after a 120-110 loss in Game 5 of the Western Conference Finals.

Nowitzki said he believed in the core the front office is building around Doncic and the team’s potential to build on last season’s success.

“We have the coaches and everything in place,” Nowitzki said. “They showed that last year. You know, we’ll just have to wait and see how the season goes. I think losing Brunson is, of course, difficult. He’s been a very big part of what we do. the last few years. . But hopefully by adding Timmy Hardaway into the mix and a few other guys we can catch up.”

In June 2021, the Mavs announced that Nowitzki would join the team as a special advisor. The team said it would help the front office hire both a general manager and a head coach, according to a Mavs press release. He would also consult on other front-office decisions.

Nowitzki said that after focusing on family, travel and his children during the first years of his retirement, he is ready to be more involved with the team in the future.

“I bleed blue, of course,” Nowitzki said. “I’ve been with the Mavs, since what, 1998? They’re close to my heart. And I’ve always thought that after enjoying retirement for a bit, I’d like to get involved. I want to help. The playoff race was probably the most I’ve been through. I almost saw every game. It was so awesome to see these guys working so hard and breaking into the top 4. It was an amazing journey. Hopefully , here, in the near future, I will be much more present and I will really try to help the organization even more.”

Nowitzki also said he grew closer to Doncic over the years, seeing a lot in the Slovenian superstar who reminded him of himself during his younger years.

“He’s like me 20 years ago,” Nowitzki said. “When you’re unsure and English isn’t your first language, I think you’re always a bit shy with the cameras on. I didn’t mean anything bad. I was exactly the same. A once the camera is off, this kid is hilarious. He breaks everyone. He’s a prankster. He likes to have fun with his teammates and with people around him that he’s comfortable. So, I think that with me he feels quite comfortable. He talks nonsense and we generally enjoy each other’s company.”

“He knows whatever he needs, I’m more than happy to help him. Whether it’s on or off the pitch, he knows I’m always in his corner. He’s such a good lad. He has a huge heart. He means well, so if there’s anything I can do for him, I’m happy to do it.”