A new class of CHSAA Hall of Fame members is enshrined 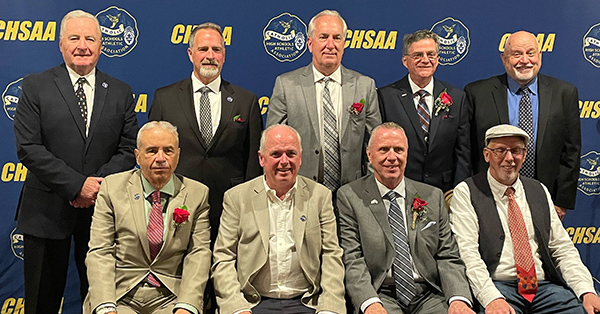 Much like the annual Basketball Old-Timers of America dinner, the CHSAA Hall of Fame golf outing and induction ceremony on Ascension Thursday is a local spring sports tradition.

However, as was the case with the Old-Timers, the COVID-19 pandemic caused the postponement of not one but two Hall of Fame inductions. This spring, however, marked the return of the celebration of our city’s high school athletic association — often dubbed one of the best high school athletic organizations in the nation.

Seven new inductees took their rightful place in the CHSAA Hall of Fame on May 26 at the Inwood Country Club on the Rockaway Peninsula. These lifers were honored for their dedication to the Catholic League of New York as a student-athlete, coach, administrator, official or contributor.

Over the years, the newsletter has been a valuable resource for more than 200 college basketball coaches nationwide – given its detailed analysis of high school student-athletes up and down the East Coast. Konchalski died in February 2021 after a two-year battle with cancer.

Dan Anderson began umpiring high school basketball games in 1982. During his umpiring career, he made the CHSAA “AA” Finals three times, the “A” and “B” Finals twice. “, and once at the championship match of the “AA” federation. .

Anderson rose through the collegiate ranks as a basketball official – reaching the Division I level. At the height of his career, he officiated games for six different Division I conferences.

Ed Blackburn stood out in track and field at Moore Catholic, where he earned Staten Island Advance All-Star honor. He then served 20 years with the NYPD and is a member of the NYPD Emerald Society and the NYPD Honor Legion.

After graduating from Archbishop Molloy and St. Francis College in Brooklyn Heights, André Anselme ended up coaching as an assistant varsity basketball and baseball team at Manhattan’s Power Memorial Academy. He finally took over as head coach of college baseball in 1978.

Anselme also spent time as an assistant college baseball coach at St. Raymond’s HS in the Bronx. There, he began working for the CHSAA, starting as co-chairman of basketball, then becoming secretary of the archdiocesan league.

Frank Gambino ran the track for Archbishop Molloy from 1970 to 1974. After a coaching stint with Msgr. Scanlan HS, the Bronx, he returned to Molloy as a second-year track coach for the boys and guided his teams to 14 Brooklyn-Queens championships and seven city championships.

He then took over the freshmen from the Stanners while winning 23 more Diocesan Championships and four City Championships. In 2000, he coached the first-ever Molloy women’s cross-country team to a city championship title once the school went co-ed. He was also an assistant coach for the men’s varsity track team, which won 40 Brooklyn-Queens titles and two city championships from 2001 to 2021.

In 1989 Dan McBride began coaching women’s swimming and diving teams at St. Anthony’s HS, South Huntington, LI, and soon took over the boys’ program as well. In 32 years of training, he amassed a 196-65-2 dual meet record – good enough for a .745 winning percentage.