Best trades the Hawks must make before the NBA trade deadline The Atlanta Hawks didn’t have the season they were hoping for after reaching the Eastern Conference Finals the previous season. The Hawks are now 24-26, and there are definitely areas where they can improve before the trade deadline this year.

The Hawks will have to make some interesting moves over the next two weeks if they want to get back to the Eastern Conference Finals, so let’s take a look at some moves that could help the Atlanta Hawks on the date. limit this year.

While all of these transactions can be difficult, some competing teams will overspend and have to return a large package due to player salaries. Not all of these swaps are likely, but the teams in contention will do their best to improve, which could lead to some unusual deals, as we’ve seen in the past.

Best trades the Hawks must make before the NBA trade deadline

Although the Golden State Warriors have made it appear unlikely that it will be possible to trade any of these three players, they can consider it because they are in a must-see scenario. James Wiseman has the potential to be a great player in this league one day, and the Hawks could benefit from that not just now, but in the future with Trae Young.

When considering whether Golden State would make that move, it makes sense because they would get a better player than the three players they are getting rid of. Golden State would find someone who could have an immediate impact on a team that needs to win a championship over the next few seasons due to some of their stars nearing the end of their careers.

The Hawks are said to be trying to trade John Collins, and while they won’t find guys who can make an instant impact for them, it’s something they should consider.

It’s an intriguing situation, and while the Hawks might not want to trade either player, the fact is they might not get any minutes come playoff time. Marcus Smart would be exactly what the Atlanta Hawks need in a goalie who can defend at a high level. The Hawks’ main problem right now is that they have below average guard defense because of Trae Young. That’s not a big deal since Trae Young is one of the best point guards in the NBA, and while he’s a below-average defender, he’ll make up for it on the offensive end.

If the Hawks want to replicate their success from last season, they may have to face the Brooklyn Nets and Milwaukee Bucks again. When the Nets come to town with James Harden and Kyrie Irving, they’ll need someone who can at least try to slow them down. Jrue Holiday and Khris Middleton had an outstanding streak against the Hawks in their Eastern Conference Finals clash, showing their lack of guarding depth.

Marcus Smart is rumored to be on his way out of Boston, and the Atlanta Hawks deal isn’t the best ever, but it’s something they could consider.

There has been a lot of speculation that the Atlanta Hawks would be interested in trading for Kenrich Williams, and it’s something they should seriously consider. According to various reports, the Thunder are simply looking for a first-round pick in exchange for him, but if they want more, the Hawks could opt to trade Johnson. Atlanta will do the legwork to try and get their team as good as possible for the playoffs, despite the fact that Jalen Johnson is still young in his career he doesn’t necessarily fit a role for this Hawks team for the moment .

Kenrich Williams isn’t going to impress anyone, but he can play top defense, which is what the Hawks will be looking for at the trade deadline.

It’s the most intriguing option, although it seems unlikely given the Sixers’ desire to reclaim a top 25 talent for Ben Simmons. Although John Collins is not in the top 25 players, depending on the game he offers, he could be considered one of the top 30-35 players. He’s one of those guys who could play a lot better after leaving Atlanta because he doesn’t get enough attention on the offensive side of the ball, which caused him to be aggravated by his situation there.

The Hawks would get Ben Simmons, and while he’s not the greatest player of all time, he’s arguably the best defenseman in the league, which should be of interest to Atlanta. 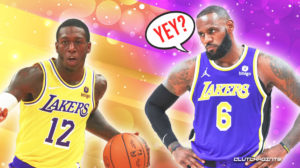