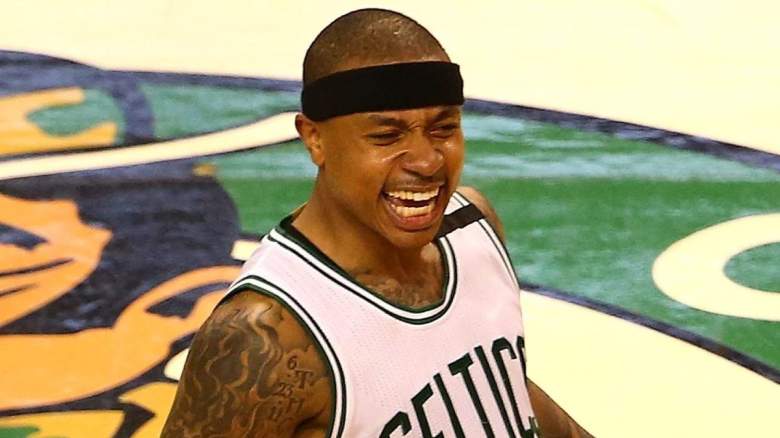 Isaiah Thomas of the Boston Celtics.

Over the years, the Boston Celtics have hosted a host of NBA legends. Guys like Bill Russell, Larry Bird and Paul Pierce all created their own legacy in a Celtics uniform. It’s hard to become an all-time Celtic great because there’s already such a long list of amazing players.

However, while players like Russell, Bird and Pierce all spent more than a decade in Boston, one player captured the hearts of the city in just two and a half seasons: Isaiah Thomas. The point guard has become one of the most beloved Celtics in recent memory in a very short time.

Since Thomas was traded by the Celtics, fans begged him to come back. And while he didn’t return to Boston, Thomas remained very vocal on the NBA landscape. In fact, he recently praised a young NBA point guard from the Pacific Northwest.

Thomas loves to talk about hoops on Twitter, so it was no surprise to see him hype Flynn. In fact, it’s not even the first time this summer that Thomas has taken the time to promote a friend of his.

The former Celtics point guard constantly takes to Twitter to offer his thoughts on the NBA. Often, this is for the purpose of promoting himself or some of his friends in the NBA. On July 15, Thomas chose to show some love to one of his former teammates, DeMarcus Cousins.

“I’ve witnessed a lot of those special moments! The greats should all praise Demarcus now, he’s a big reason why they play the way they do now REAL S***” Thomas tweeted.

I have witnessed many of these special moments! The greats should now all be praising Demarcus he’s a big reason they play the way they do now REAL SHIT https://t.co/IWupaL9ZYl

Cousins ​​played with the Milwaukee Bucks and Denver Nuggets last season, but the Nuggets were the team that took a real chance on him. He’s even been touted as a potential backup center option for the Celtics next year.

As for Thomas, he also got another shot in the NBA last season, but as free agency continues, the point guard is still looking for his next opportunity.

Last season, a ton of ex-NBA players got another shot at qualifying for the league due to COVID and the rise in 10-day contracts available. guys like Joe Johnson, CJ Milesand Mario Chalmers all received 10-day offers. Thomas was another such player, as the Charlotte Hornets handed him several 10-day contracts. And after that, he played so well that Charlotte signed him for the rest of the season.

At 33, Thomas is nearing the end of his NBA career, but he may still have enough time to make one last run in the league.

Heavier on the Celtics News