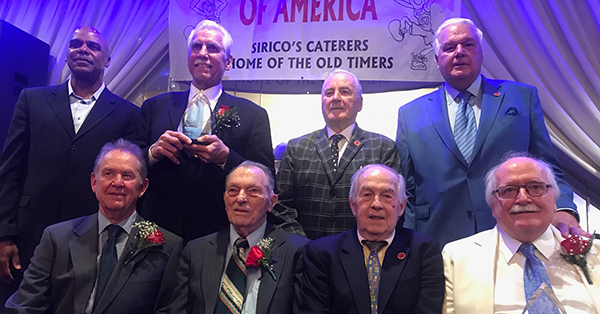 They waited three full years, but eventually members of the local basketball community were able to come together again. Of course, the stories they told over and over again in 2019 were back and more over the top than ever!

For the 61st year, the Basketball Old-Timers of America gathered for their annual dinner and Hall of Fame induction ceremony at Sirico’s Caterers in Dyker Heights on May 6. College, Brooklyn Heights – brought back the spring tradition after missing two events due to the COVID-19 pandemic.

Former basketball players, coaches, officials and fans still say the event is one of their favorite nights of the year. Nearly 260 attendees enjoyed the evening – marking one of the largest groups ever gathered to celebrate the game of town.

“We were really looking forward to this,” McDermott said. “It was great to see people and reminisce. Reconnecting with people over the years, you don’t miss a beat. The friendship is still there.”

From the first three inductees in 1959 – William “Pop” Gates, Pop Harris and Andrew “Fuzzy” Levane – to the new class of five, the Old-Timers Hall of Fame continues to honor the contributions made to the game of basketball in New York City.

“It was supposed to be the class of 2020, but we had to hold it back,” Nash said. “Everyone was thrilled to be back and can’t wait to leave because we were gone for so long.”

This group is truly a basketball fraternity, and the annual dinner serves as the induction ceremony for the new Hall of Famers.

A native of Brooklyn, Armond Hill graduated from Bishop Ford HS, Park Slope, in 1971. He then played at Princeton University, NJ, from 1972 to 1976 and was named the Ivy Men’s Basketball Player League of the Year as a senior.

He was drafted by the Atlanta Hawks with the ninth pick in the 1976 NBA draft and spent eight seasons as a professional for the Hawks, Seattle SuperSonics, San Diego Clippers and Milwaukee Bucks. Over 468 games, Hill is averaging 6.9 points and 4.3 assists per game.

After spending eight years as a head coach at Columbia University in Manhattan, he coached as an assistant for 15 seasons in the NBA with the Boston Celtics and Los Angeles Clippers. Currently, Hill is the assistant athletic director of basketball administration at Indiana University, Bloomington. He was also inducted into the New York Basketball Hall of Fame in 2009.

Rich Kosik was born in the Bronx, but his passion for athletics began as a sports star with the Catholic Youth Organization (CYO) at Immaculate Conception, Astoria. From there it was to Rice HS, Manhattan, and St. Mary of the Plains College, Dodge City, Kan., where he focused on basketball.

In 1968 he returned to the Big Apple and began a teaching career with the NYC Board of Education. He has always been an advocate for student-athletes, which led him to work with Athletes for Better Education.

He led the organization’s NY/NJ program for several years, working directly with the Public Schools Athletic League. As an advisor and academic director, he helped organize motivational and informational presentations for teams, coaches and parents. He continues to work
with schools, camps and community programs.

Wolodymir “Walter” Szczerbiak was born in a refugee camp in Germany in August 1949 to Ukrainian parents displaced during World War II. The family settled in Pittsburgh, and Szczerbiak first learned basketball at Ukrainian Catholic Seminary in Stamford, Connecticut.

He then went to George Washington University, Washington, D.C., where he was named the top college basketball player in Metro Washington in his senior year. He was drafted in the third round of the 1971 NBA draft by the Phoenix Suns, but ended up playing in the American Basketball Association for the Pittsburgh Condors.

Szczerbiak’s hoops career took him to Europe, where he played professionally in Spain and Italy – eventually being dubbed the “Dr. J of Europe. His son Wally played 10 seasons for four NBA teams before to retire in 2008.

Now 90, Ralph Tedesco grew up in Flatbush and attended St. Theresa of the Little Flower Elementary School. He then attended St. Francis Prep when he was in Williamsburg, Brooklyn.

After playing basketball for four years at Providence College, RI, he accepted a coaching position at Bishop Loughlin in 1957. In just his fourth season, he guided the Lions to the 1961 CHSAA City Championship.

In 1979 he moved up to the college ranks, coaching at Manhattanville College, Harrison, NY. He spent 15 years at the helm of this program and set the school record for most wins at the time of his retirement.

Pat Quigley attended St. John’s Prep, Bedford-Stuyvesant, then went on to study at St. John’s University, Downtown Brooklyn. He enjoyed a 40-year career as a history teacher at Bishop Loughlin from 1967 to 2006.

His coaching career began at the CYO of St. Barbara Parish, Bushwick. He then coached freshman basketball and junior varsity hoops at Bishop Loughlin before settling as a varsity coach in 1972.

Bob Leckie was born and raised in Greenpoint and attended St. Cecilia’s Grammar School. He then went to St. Francis Prep, where as a senior he was a Brooklyn Division A basketball star and a city honorable mention.

His 13-year coaching career at Bishop Loughlin was highlighted by the 1992 CHSAA town championship and state federation titles. He then coached at St. Peter’s for six seasons. He is a member of the St. Peter’s, Bishop Loughlin, CHSAA and NJ Hudson County Halls of Fame.