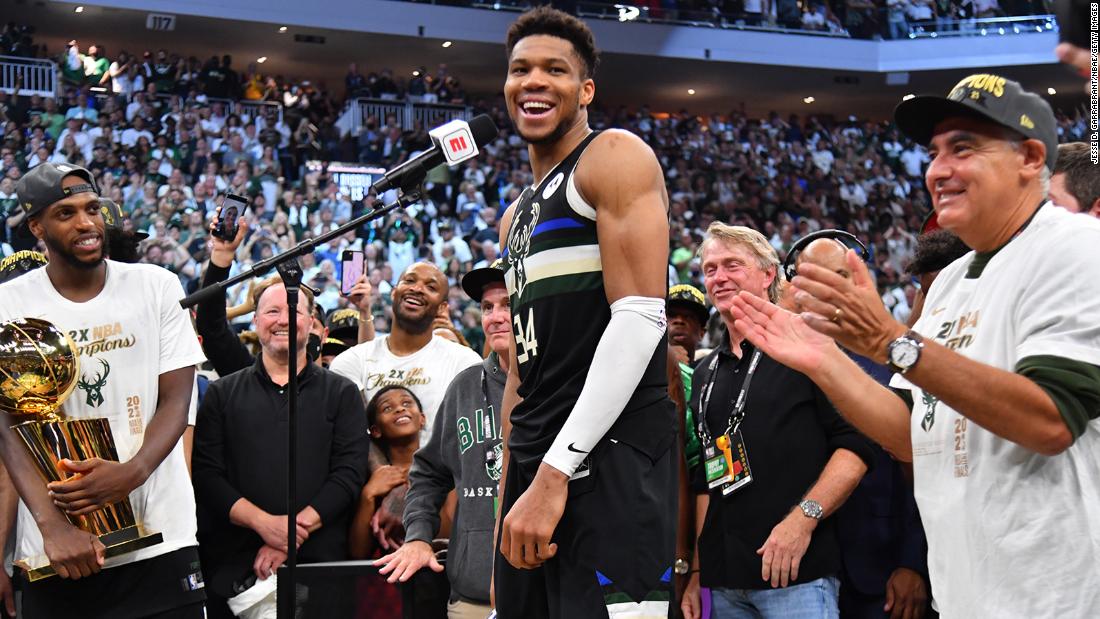 The Milwaukee Bucks star, nicknamed the ‘Greek Freak’, inspired his team to their first NBA championship in 50 years on Tuesday, registering 50 points and five blocks.

He was the first player to have at least 40 points, 10 rebounds and five blocks in a playoff game since the blocks were first recorded in 1974, the NBA tweeted. He also became the seventh player to have at least 50 points in the championship round and matched the feat of Michael Jordan and Hakeem Olajuwon after winning the MVP of the Season, the MVP of the NBA Finals and the title of NBA Defensive Player of the Year.

But no matter how big he gets, Antetokounmpo keeps his feet on the ground and credits all success to the people who have supported him throughout his journey.

“I started playing basketball just to help my family. I tried to get them out of the wrestling, the challenges we faced when we were kids,” he told reporters, beaming after the NBA Finals victory.

“But I never thought I would be 26, with my team playing the NBA Finals. I was just happy to be, like not even winning, to be a part of that, of this journey. . “

Antetokounmpo was born in a poor area of â€‹â€‹Athens, Greece, for nigerian immigrants.

Her parents had left Africa three years earlier in search of new opportunities but, due to the country’s attitude towards immigrants at the time, it was far from an easy education in Greece.

Antetokounmpo did not obtain Greek nationality until the age of 18. So he and his brothers turned to basketball to get out of their predicament, sometimes sleeping in the gym where they trained together.

â€œI never thought I’d be sitting here with this here and this here,â€ he added, looking at the Championship and MVP trophies on either side of him. “We have come a long way.”

“I want them to believe”

It was in 2013 that his life changed forever.

After showing promise in the Greek leagues, Antetokounmpo was spotted and ultimately drafted into the NBA by the Bucks.

Living in the United States without his whole family initially came as a shock, but with the support of his older brother Thanasis – also an NBA player – he’s been on an upward trajectory since then. the sudden death of his father Charles in 2017 only served as additional motivation to make his family proud.

His stunning performance in this year’s final showed just how special the forward has become.

He was 16 for 25 from the field and succeeded in all but two of his 19 free throws. It was a performance hailed by commentators and fellow players as one for the ages.

But, as has been the case with Antetokounmpo throughout his career, success is never limited to him.

â€œEight and a half years ago, when I came into the league, I didn’t know where my next meal would come from,â€ he said.

â€œMy mom used to sell stuff on the street. Now I’m sitting here at the top of the top. I’m extremely blessed.

“If I never get a chance to sit on this table again, I’m fine […] Hope this can give hope to everyone in the world. I want them to believe in their dreams. “

READ: ‘The Gold Mamba’ is ‘Humiliated and Hungry’ to Participate in Tokyo 2020

“I am a hell of a champion”

While no one can doubt his abilities on the pitch, Antetokounmpo inspired him as well.

After the pandemic forced the league to temporarily shut down in 2020, Antetokounmpo was one of the few players to publicly announce that they would give thousands of dollars to employees who do not receive a salary.

He also donated thousands of face masks and several food packages to help fight the pandemic in Greece, on the streets where he and his brothers once sold street goods to help support the family.

â€œObviously, I represent my country, the two countries, Nigeria and Greece. Lots of children from there,â€ he said.

â€œBut not just from Nigeria, all of Africa and all of Europe. I know I’m a role model. But that should make every person, every child, anyone in the world believe in their dreams.

â€œIt doesn’t matter how you feel when you’re depressed, when you don’t think it’s going to happen to you or that you might not be successful in your career – maybe basketball, maybe anything – just believe in what you’re doing and keep working.

“Don’t let anyone tell you what you can be and what you can’t do. People have told me I can’t do free throws. I did my free throws tonight and I’m a hell of a thing. champion.”