‘In this league, we could all be gone but Stephen Curry’: Steve Kerr’s hilarious response when asked to stick together 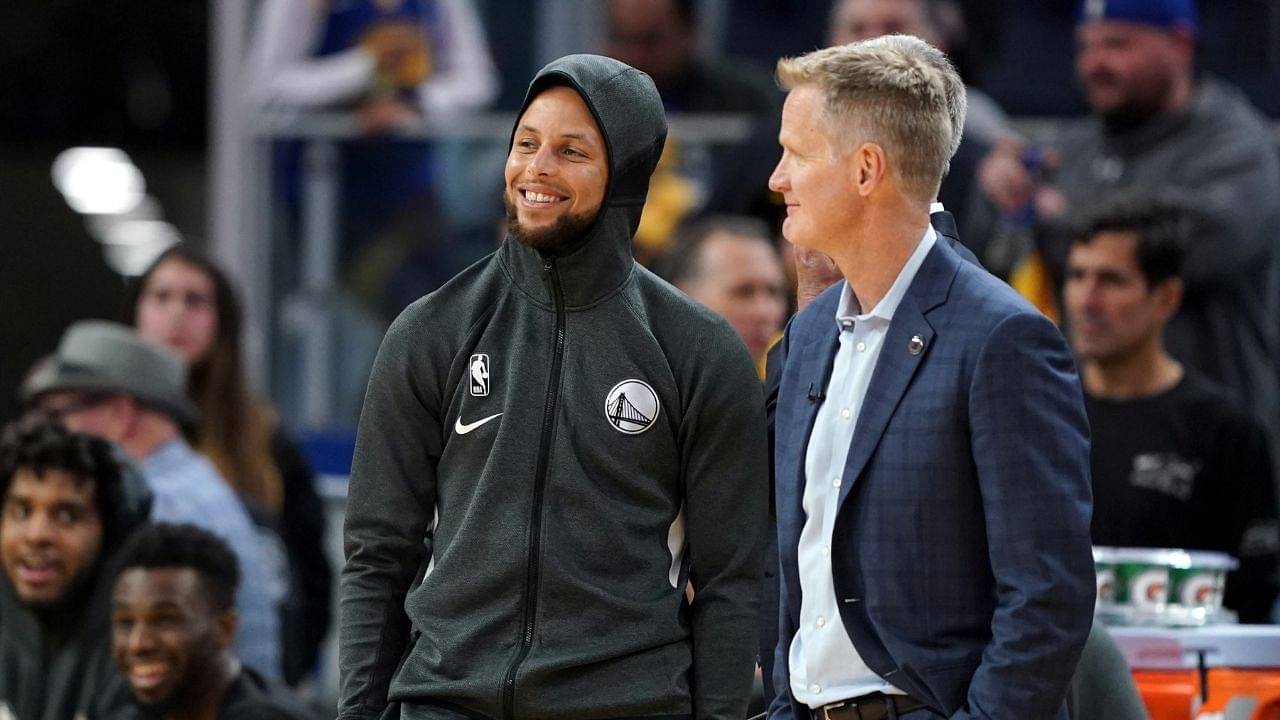 Warriors head coach Steve Kerr had the perfect answer when asked about Jordan Poole and Andrew Wiggins’ extensions impacting the cap space in the future.

The Golden State Warriors could serve as a case study for sports management schools today. Whether it’s their front office, their property or their players, the Bay Area team is a well-oiled machine. It won’t be wrong to say that Stephen Curry and co have mostly been at the top of the NBA heap for the past decade.

After their 4th championship in the past 8 years, the Warriors aren’t going away any time soon. While the Big 3 with Steph, Klay and Draymond continue to be the backbone of the franchise, GM Bob Myers and co have surrounded them with some crucial pieces in Jordan Poole and Andrew Wiggins.

Recently, Poole and Wiggins made headlines by signing multi-year contracts worth over $100 million respectively. As owner Joe Lacob continues to pay huge luxury tax bills, the front office is making strides to keep its championship core intact. So the question arises for how long?

Read also : What is Stephen Curry’s contract with the Golden State Warriors?

Before the game against the Nuggets, Coach Kerr sat down with the media, answering questions about the future restructuring of the roster, given limited cap space with Poole and Wiggins signing multi-year extensions.

“You’re not thinking about next year”: Steve Kerr on maintaining the championship roster in the future.

The Dub Nation finally has some news to rejoice in posting the turmoil of the Poole-Green punching incident. GM Myers and co wanted to right the wrong with JP, signing him to a 4-year, $140 million contract. Nonetheless, fans had something more in store for them as Wiggins also agreed to a 4-year, $109 million deal with the organization.

As ESPN’s Adrian Wojnarowski reported on Saturday, the Golden State Warriors have agreed to a four-year, $140 million contract extension with young sniper Jordan Poole and a $109 million extension. dollars over four years with Andrew Wiggins. https://t.co/VSzrmbSo1F

That’s a lot to have on the payroll, which already has stalwarts like Steph, Klay and Draymond. During a recent media interaction, Coach Kerr was asked about the potential restructuring of the roster after the heavy contracts of Poole and Wiggins, to which he responded as follows.

“You don’t think about next year, because in this league, we could all be gone… except Steph.” –Steve Kerr 😂 pic.twitter.com/bysttcTkoh

The former unanimous MVP is the only player to have received two contracts over $200 million, the first being a supermax in 2017 worth $201 million.

Currently, the four-time champion is on a 4-year, $215 million contract that begins this season, paying him an average salary of $53 million.