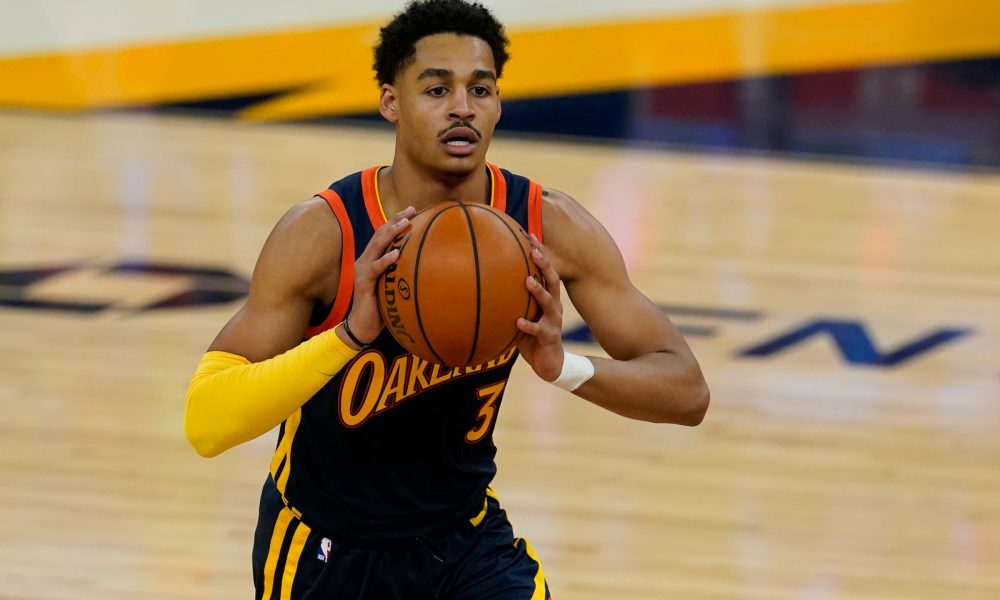 For most of the 2020-21 season, the Golden State Warriors have hovered around a record 0.500. It wasn’t until the last 20 or so games that the team finally started to show some consistency as they chased one of the last places in the Western Conference playoffs.

From April 9 until the end of the season on May 16, the Warriors went 15-6 and finished 39-33, good enough to earn a berth in the play-in game against the Los Angeles Lakers. They would lose that game 103-100, as well as the subsequent game of play to the Memphis Grizzlies, and miss the playoffs for the second year in a row.

But despite that, some positive signs could continue into the coming season, most notably the improvement of Jordan Poole.

Poole started last season after what could be described as a forgettable rookie season. He spent a lot of time in the G League and when he spent minutes with the Warriors he often looked lost and out of place. But at the end of the year, there was no doubt about his ability to be a usable NBA player.

In the final two months of the season, Poole came off the bench and posted the best numbers of his career to date. He finished the year averaging 12.0 points per game with 43.2% shots from the field. One of the most improved aspects of his game was his three-point shooting. He only shot 27.9% downtown as a rookie, but he upped that figure to 35.1%.

Now that he has shown the coaching staff that he is capable of being a quality player in their system, he knows he is going to have to postpone that until next season.

â€œI just have to get the job done to try and improve the momentum I had last season,â€ Poole told Basketball Insiders. “I have to take this in this season.”

Much of Poole’s continued development has been his time with the Santa Cruz Warriors, the Golden State‘s G League affiliate. It was during his tenure as a rookie that he really started to show signs of being the type of player the Warriors envisioned when they drafted him.

Last season, it was a bit of a surprise when the Warriors announced they were sending Poole to the G League bubble in Orlando, Florida. But that decision ended up paying off as Poole blossomed in the bubble and took it with him when he joined the Warriors.

Golden State initially intended to keep Poole with Santa Cruz for the duration of the bubble, but they called him back after 11 games. In those games, he scored 22.4 points per game, 5.3 rebounds and 3.6 assists while shooting 45.1% from the field.

Being able to be the focal point of offense in the G League is something Poole attributes to his improved play.

â€œThe G League is a good experience to be able to get reps, to be able to be the main player and to have a lot of action, experiences and live game situations under my belt,â€ said Poole. â€œThey are live representatives. Being able to have that look and go play at the top with the team really helped me. “

And this summer, Poole has certainly been busy. During the offseason, many players compete in pro-am leagues across the country. The Drew League in Los Angeles has always been considered one of the best races in the country among basketball circles with NBA players as far away as Byron Scott and Michael Cooper dressing on their playing days.

In recent years, The Crawsover in Seattle hosted by former NBA player Jamal Crawford has also grown into one of the premier offseason leagues and also showcases some of the nation’s top pro, college and high school talent.

Poole has adjusted in both leagues this summer, dropping 36 points at The Crawsover and then getting 26 in the Drew League. On his debut with Drew, he showed his improved three-point shot as well as his ability to attack the dribble and hit the rim.

Having now played in both leagues for the first time, Poole was impressed with the level of competition and was grateful to have been able to participate in live games during the offseason.

â€œThese pro-ams, they are very well configured. There are a lot of top guys here, â€said Poole. â€œJust being able to organize a race in the summer is definitely beneficial. Being in the offseason and having good runs with all these guys is really really cool.

And as the start of the 2021-22 NBA season draws closer, the Warriors know for sure that they will be without All-Star shooting guard Klay Thompson at least until around Christmas time. With his absence, there will be an opening for a starter in the backcourt alongside Stephen Curry until Thompson returns.

Looking at the list, it looks like Poole can get his shot to be the temporary shooting guard. Warriors head coach Steve Kerr said so in a recent interview with Tim Kawakami of The Athletic.

Poole looks forward to the new challenges that lie ahead, and he understands that with a healthy Warriors squad, the expectations are sure to be high.

â€œI think it’s going to be a really exciting year, we’re going to get back to pretty good health,â€ said Poole. “We have Klay coming back, we have James [Wiseman] Coming back, we added a lot of vets during the offseason. We’ll find a way to put the pieces together and try to have that championship season that we want. It’s going to be pretty exciting.