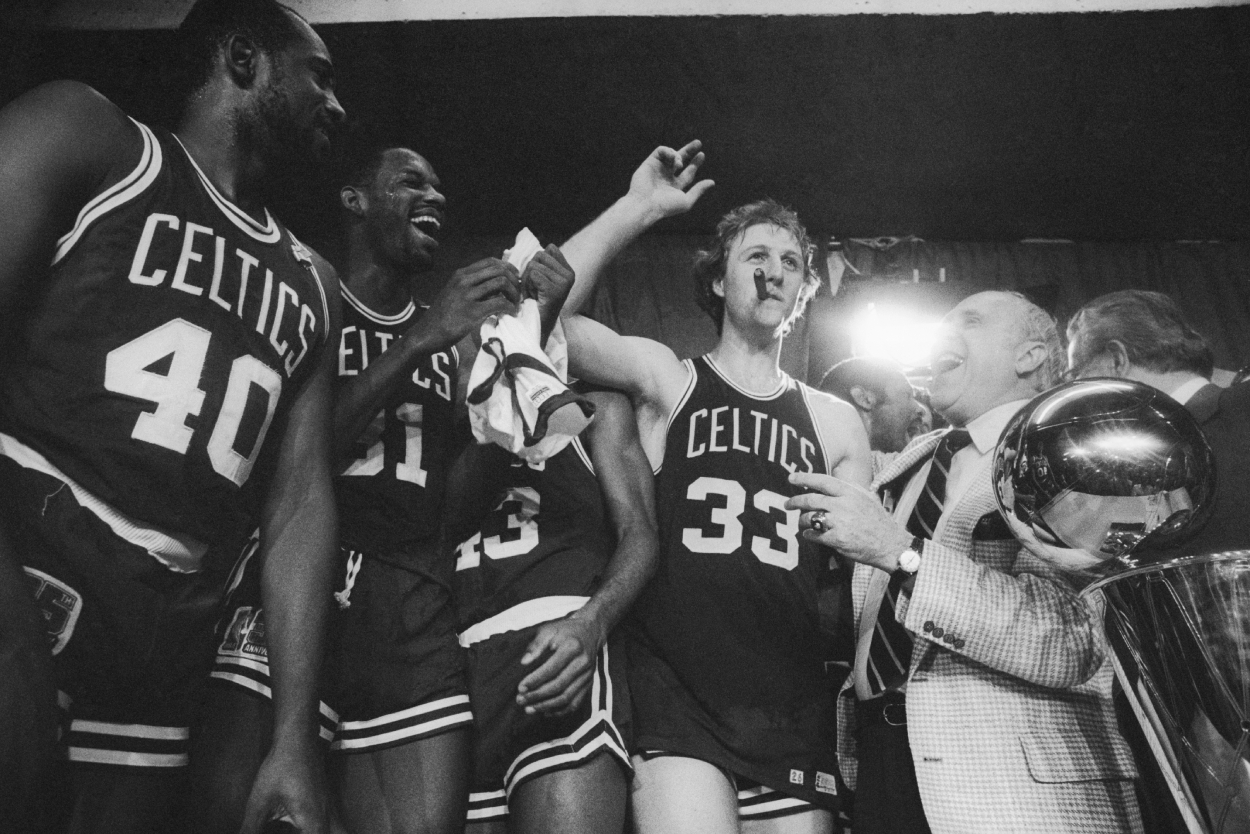 Larry Bird was a confident basketball player, but he was also tough on himself. The Boston Celtics legend and three-time MVP was one of the best of his time, possibly one of the 5 best players of all time.

In 1981, he won the first of his three championships in his second season in the NBA. The die-hard 6-foot-9 forward then awarded himself a letter as a player, and the result was somewhat surprising.

Bird wasted no time making an impact in the NBA. Fresh out of his thrilling 1979 NCAA title game against Magic Johnson and Michigan State, he won Rookie of the Year with the Celtics. In his first season, Bird started all 82 regular season games and averaged 21.3 points and 10.4 rebounds.

The following season, he formed arguably the best frontcourt ever with newcomers Kevin McHale and Robert Parish, leading Boston to the NBA Finals. The Celtics went about business, beating Moses Malone and the Houston Rockets in six games.

In his second year of pro ball, Bird continued his success by averaging another double-double with 21.2 points and 10.9 rebounds. He also made his second consecutive NBA All-Star appearance.

The 81 title was one of three Boston won under Bird’s leadership. He also won the league MVP title three consecutive seasons, winning from 1984 to 1986. Bird played 13 seasons in the NBA, winning All-Star honors in 12 of them.

Bird was inducted into the Naismith Memorial Basketball Hall of Fame in 1998.

Larry Bird got noticed early in his career

Bird is one of those players who always wanted to improve. He worked hard in his craft, knowing that some opponents were faster and much more athletically gifted. If there was one loose ball, it was Bird’s. He was the all-around player, but he was also hard on himself and hard on his teammates.

Bird’s basketball intelligence, worth ethic, and performance were reported in November 1981 Illustrated sports article. He then took on the role of teacher, earning himself a mark for his basketball performance. Surprisingly, he wasn’t that hard on himself.

â€œAs I tell people,â€ he said, â€œI’m not the smartest guy in life, but on a basketball court I consider myself an A-plus.â€

Coming from one of the most self-critical athletes, it’s a mind-boggling note.

He did, however, want to clarify his comment about not being the smartest guy in life.

â€œIt’s not that I’m stupid,â€ Bird said. â€œI can follow 90 percent of the people in this world. I just can’t explain myself to people. I want to let them guess. The way they take me is the way they take me.

Bird was the Boston star but never wanted the hype

For 13 NBA seasons, Bird was the top player on some outstanding Celtics teams. He received star treatment from the media and fans, but never got it with his teammates.

â€œIf it hadn’t been for Tiny (Archibald), Max (Cedric Maxwell), Robert Parish, you know I could be there but we wouldn’t have won anything,â€ he said.

While he garnered his share of praise, one of the best compliments came from McHale, who called him a loyal teammate.

“I have never known another loyal player,” said McHale. “If you’re Larry’s teammate, you’re one of the most important people in the world to him.”

Bird was a winner. He was a star and an accomplished team player.

RELATED: Larry Bird Brought His Teammates To French Lick, And Bill Walton Left With A Memory And A Weird Feeling Of The City