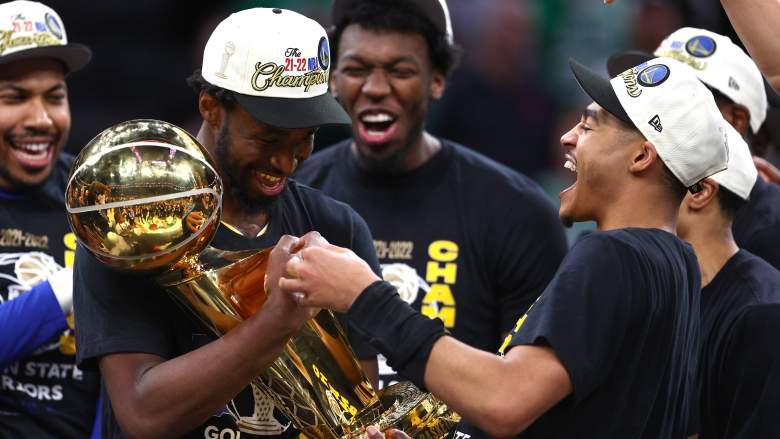 Andrew Wiggins and Jordan Poole (right) of the Warriors

Ultimately, if there is anyone who is likely to be left out of the mix of upcoming Warriors contract decisions – and there are many decisions to come – it could be the youngster who will receive the axe. It’s not the nicest thought for a team, coming off the top of an NBA championship, but it’s the reality the Warriors will soon face.

After all, it’s hard to imagine Golden State going through the productive final years of Stephen Curry’s career without Klay Thompson and Draymond Green on board, and Andrew Wiggins’ postseason performances this spring showed that the team doesn’t. really can’t get away from him. , That is.

Poole, however, is a guy the Warriors can live without, especially when players like Jonathan Kuminga and Moses Moody develop. And with hefty luxury tax bills looming as Poole’s extension deadline nears (October 18), the tough choice the team have to make over who to keep looks a little easier – Poole , whose flashes of genius are tempered by inconsistency and defensive flaws, is unlikely to stay with the Warriors if he wants the contract in the $25 million per year range he seems to warrant.

The Warriors can pass Poole an extension if they choose, allowing him to become a restricted free agent next summer. If he gets there, a league executive speculates that we can expect at least one team with cap space to be ready to pounce.

“I would be careful that the Magic be ready to make an offer if they are restricted, knowing that there is a good chance that Golden State will not match,” said an Eastern Conference executive at Heavy Sports.

Magic would be the perfect fit for Poole

The Magic could have nearly $60 million in salary cap space in the summer of 2023 and will be eager, after two years of rebuilding plus next season, to begin a roster turnaround. They are very high on the prospects of big man Paolo Banchero, the No. 1 pick in this year’s NBA Draft.

“They are going to establish something with Paolo in the frontcourt, with his passing. But they’re also going to need a top perimeter scorer. If you put Poole with Paolo and Franz Wagner, it’s an exciting young team,” the executive said.

This could prove to be a good opportunity for Poole, who is 23 and has just completed his third season. He could find himself stuck for minutes between Thompson in his final NBA seasons and Moody, who showed promise through the regular season and playoffs if he stays with the Warriors.

Poole averaged 18.5 points last year, shooting 44.8% from the floor and 36.4% from the 3-point line, but saw his minutes dwindle during the championship race because of his defense. He played 32.9 minutes in the first nine games of the playoffs, but only 23.8 minutes in the last 13 games.

But Poole may not get an extension because, under NBA base-year compensation rules, it becomes very difficult to trade him until next year.

The Warriors have the option, under NBA rules, to pay any key players they put forward for new deals. But that could push the team’s payroll to approximately $225 million and put the total expense at over $400 million with the luxury tax.

No one expects the Warriors, who are expected to have the second-highest payroll in the league this year ($194 million) behind the Clippers ($195 million), to pay that much.

“They make a lot of money,” the exec said. “They can do things that most other teams can’t, right down to keeping their talent in place. But even with that, there are limits. They made a choice with (Gary) Payton. They will relive that here.