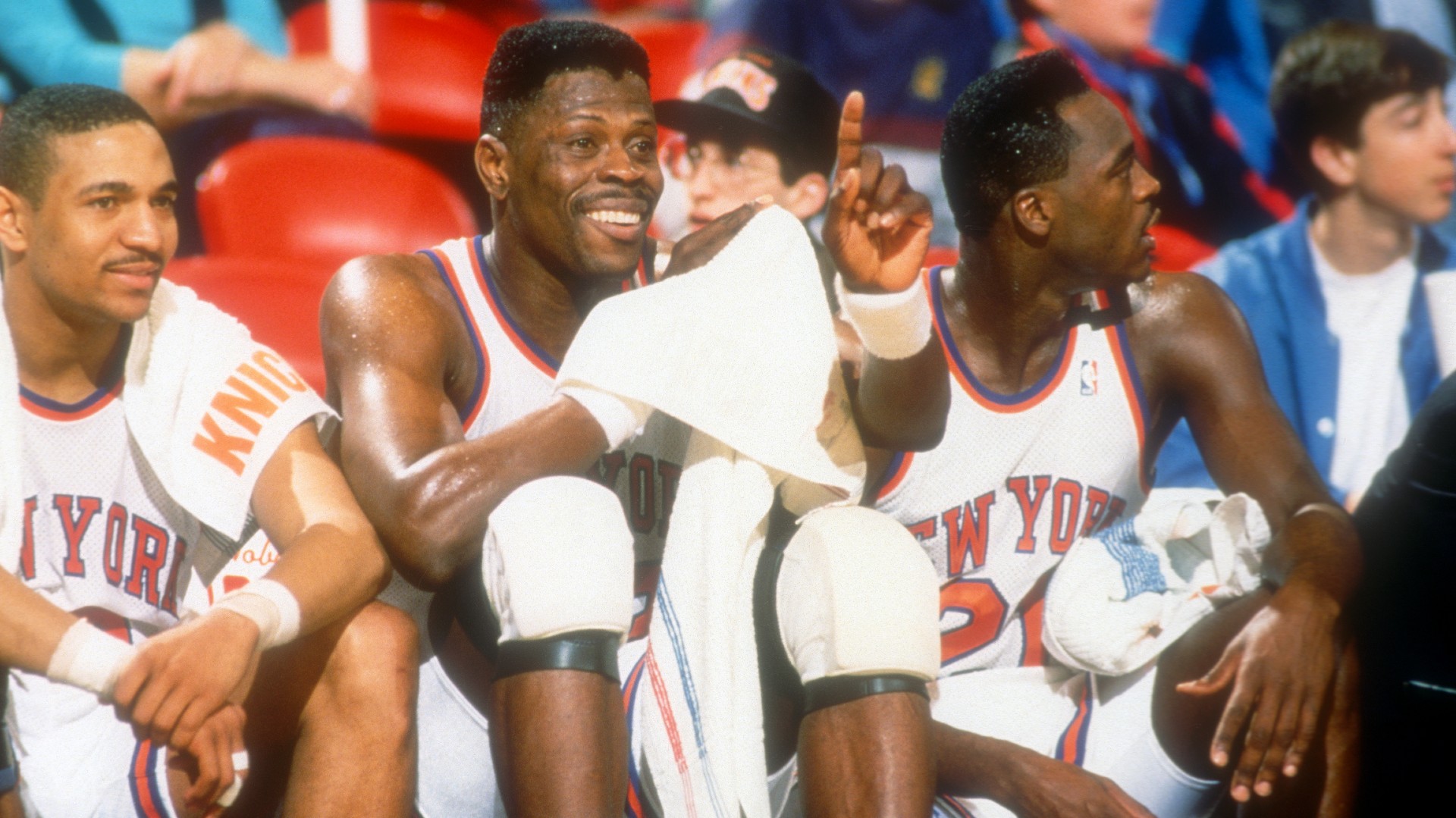 The NBA celebrates the players on the NBA 75 roster almost daily by the end of the season. Today’s winner is longtime Knicks star Patrick Ewing. This story about Ewing originally appeared in the January 15, 1990 issue of The Sporting News.

NEW YORK – Last summer, while Patrick Ewing was doing off-season training, his trainer told him if he added a little muscle he would become the best player in the National Basketball Association

Ewing’s 5-year-old son Patrick Jr. was playing nearby and overheard the remark. He hissed. “My dad is already the best player.” Who could argue?

If the past two seasons have been a celebration for the New York Knicks 7-footer center, then the 1989-90 campaign must be its crowning glory. Ewing, 27, is living a season straight out of dreamland. At last glance, Ewing was averaging 27.9 points, 10.1 rebounds and 3.6 blocked shots per game while sinking 53.9% of his shots onto the field and 81.1% from the throw line. frank.

“I think I’m having a great year,” Ewing admitted, showing as much exuberance as he allows himself. “But it’s not my style to talk too much about it. I always thought I was a very good player and that I played to the height of my potential. This year my score is up because I got more shots. My teammates give me the ball. If they get it for me, I’ll score with it. “

Lithuanian émigré Sarunas Marciulionis, a former member of the Soviet national team who is a rookie with the Golden State Warriors this season, marveled at his first look at Ewing. “I’ve never seen anything like it,” he said. “A machine. Just a machine.”

Marciulionis had just watched Ewing score 44 points and grab 24 rebounds to lead the Knicks to a 129-111 victory over the Warriors at Oakland Coliseum Arena on November 29. At the time, Ewing was in the middle of a four-game swing westward. during which he averaged 35 points and 12 rebounds while shooting 65% from the field.

“Awesome,” Philadelphia 76ers center Mike Gminski said after Ewing scored 32 points as he led the Knicks past the Sixers, 114-103, on Dec. 5 at Madison Square Garden. “They finally use the guy. The guy gets the ball 35 times a night. When you go to the Garden you know you’re up for it.

“His early years in the league, maybe he wasn’t ready for it. Now that he’s fully involved in the attack, other parts of his game are picking up. I don’t know if there is. a center that’s having a better year than it is. “

Gminski’s praise may carry more weight than other applause, as he has had more success against Ewing than most other NBA hubs. When he says Ewing has become the Force, believe him. It was Gminski who kept Ewing at 45% shooting accuracy and averaging 17 points in three playoff games last season. Because the Knicks won all three, people forgot how Ewing struggled.

Ewing was named NBA Player of the Month for November as he led the Knicks to a second straight Atlantic Division title. But Ewing wants more than that. He wants the Knicks to get past the second round of the playoffs and he hopes to be named the NBA’s MVP.

“I’m greedy,” Ewing said, displaying a disarming smile, which comes easily these days – unlike the stark image he had when he was under the microscope at Georgetown University. “I want both, but I can’t win the MVP if we don’t win a lot of games. I want to win the championship.”

Ewing swears he doesn’t try harder than he did in his first four seasons in the NBA. He thinks there is a circular logic at work when critics praise or condemn something.

In Georgetown, he glared and rarely spoke to the press. He may have existed behind a wall of security and mistrust put in place by coach John Thompson. But what many observers saw as negative, Ewing argues, was positive.

“I don’t think I was safe,” he said. “I was given the opportunity to grow as a person and get a degree without living in a circus.”

Once he learned what he can do with basketball, it took him to greater heights than anyone could have imagined. However, his professional rise was not without pain.

For years he read about a Patrick Ewing he didn’t know, an angry, ignorant, non-communicative, underachiever.

“People saw me in a certain way,” Ewing said. “Now some of those same people say I’ve changed. But I’m the same as I’ve always been. It’s just that some people have stopped perceiving me the way they did in college. see you on the basketball court and they assume that’s how you are in person. It’s not. On the court I’m one-sided. Off the court I’m totally different – relaxed, calm. “

Or, as his friend and teammate Kenny Walker puts it, “He’s a big teddy bear.”

If so, this teddy bear was in the mood for a growl during his first seasons in the NBA. Despite winning the Rookie of the Year award in the 1985-86 season, he was widely criticized for missing 32 games due to injury. A hesitant knee, which ultimately required surgery, cost him 19 games in his second season.

When he failed to demonstrate his dominance, he was downright torn by the press and by Hubie Brown, the Knicks’ coach at the time. Brown was convinced he needed to implement a Twin Towers approach with the Knicks and decided that Ewing should play forward with Bill Cartwright in the middle.

As Ewing expressed his displeasure with the arrangement and the Knicks stumbled through the first part of the 1986-87 season, Brown became enraged. He once went so far as to say, “Patrick is embarrassed by his play.

Ewing wasn’t embarrassed, but he was stung by Brown’s remarks. As a result, he withdrew from the coach.

A Knicks teammate that season said: “The only reason he’s starting is because they pay him $ 3 million a year.”

Brown was fired as the Knicks finished 24-58, tied for last in the Atlantic Division. But he threw a tee shot by saying, “The guy who doesn’t do his job is Ewing.”

A current Western Conference coach, demanding anonymity, said: “Word around the league was as people questioned his heart.”

Ewing’s criticism then flowed as freely as praise does now. “You can’t let what people say bother you,” Ewing said. “I think I’m the same now that I always have been.”

Not really. First, instead of hearing he was the cause of the Knicks’ horrific records – a 23-59 mark in his rookie season and the 24-58 log the following year – he is told daily that ‘He’s the reason for the Knicks. resurgence, which started with a mark of 52-30 last season.

He doesn’t look alike either. The most obvious change is the smile, which he rarely displayed in his first two seasons as a pro. Now that’s as much a part of Ewing as his nearly unstoppable jump shot. Then, too, he got more muscular, thanks to joining off-season conditioning programs.

“I’m stronger, physically,” he said, “and I’m five years older, five years older. People get better with age, they get wiser, smarter. . I am more balanced, in control. “

Ewing has of course been compared to some of the game’s legends.

Magic Johnson of the Los Angeles Lakers said last year, “To be honest, I didn’t think Patrick Ewing was as good as he thought he was.”

Now Johnson says, “Patrick pushed his game to the limit. I don’t know what turned on the switch, but I know it’s going to be awfully hard to turn off.”

Ewing points out that this did not happen by accident. Still confident, his sales confidence grew last season, when, playing a career-high 36.2 minute average and appearing in all but two Knicks games, he set personal bests in scoring ( 22.7), rebounds (9.3), field goal percentage (.567), free throw percentage (.746), assists (188) and blocked shots (281).

“I think I was given the talent to do what I did,” Ewing said, “but there are a lot of people with the same talent and the same abilities that just can’t do it. have to work and refine that, I’m very proud of what I’ve done.I’ve done a lot.

“I think there is still a long way to go.”

If there’s one nuance in Ewing’s play that has made him an MVP possibility this season, it’s in his ability to pass.

“That’s the key to Patrick,” said Stu Jackson, first-year Knicks head coach. “If he’s a threat in passing, he can’t be guarded.”

Of course, keeping Ewing is only a problem for his opponents. To be guarded by him is another matter.

“You can tell how vital Patrick is when you watch the reaction of other players when he’s out of the game,” Jackson said. “They’ll get in the lane, get to the basket. People’s eyes will light up because the intimidating factor isn’t there.

“When he’s in there, they don’t even think about it. They walk down the field and start looking around, questioning themselves.”

This is true on both sides of the field. If Ewing continues to produce at his current levels, he will set team records for points and blocked shots.

“Maturity and experience are the best teachers for a talented young player,” said Lakers general manager Jerry West. “He has become a dominant player.”

Patrick Ewing Jr. has known this for some time.