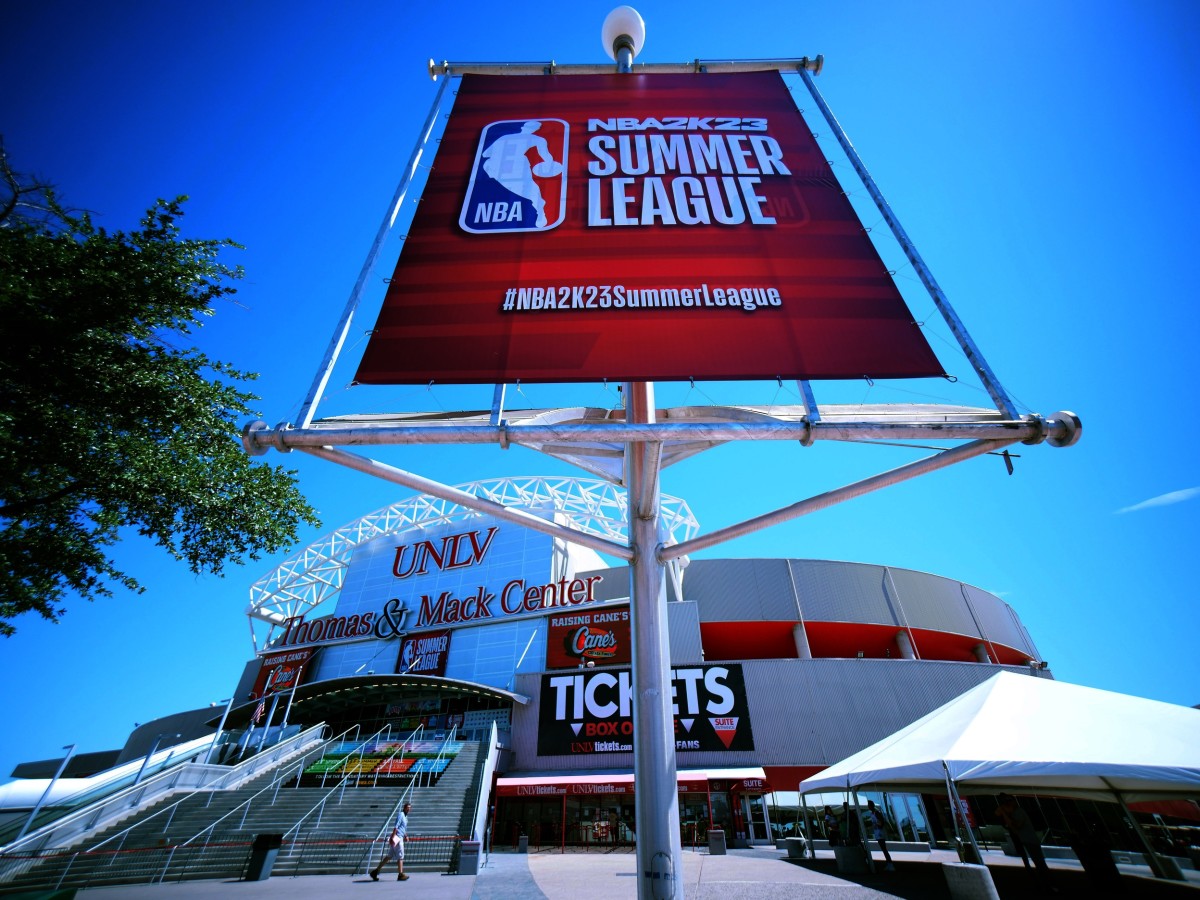 On Monday, only six games were played in Day 5 of the Las Vegas Summer League.

Many circled Game 4 of the day with the Oklahoma City Thunder and Orlando Magic as the idea was that we would see this year’s No. 1 pick in Paolo Banchero take on this year’s No. 2 draft pick in Chet Holmgren.

In the end, Banchero didn’t play after playing the first two Summer League games for Orlando, but Holmgren played for the Thunder and made the most of his opportunities.

Outside of the rookie stars, there were plenty of other titles released on Monday.

Trey Murphy III and the New Orleans Pelicans made some early noise from the Cox Pavilion and later Matt Ryan and the Boston Celtics took care of business in a super high scoring deal with the Milwaukee Bucks.

The Summer League just keeps getting better and as we approach Day 6, we should expect nothing less than more great games played!

Here’s a game-by-game breakdown of what happened on Day 5 of the Las Vegas Summer League, as well as who the day’s “big winner” was.

The first game of the day was the “Trey Murphy III show,” as the New Orleans Pelicans sophomore wing recorded 30 points on 10-18 shooting, 3-6 from three-point range. Murphy also had 6 rebounds, 1 steal and 1 block against the Atlanta Hawks.

Coming off of a nearly 30-point victory, the Pelicans are more worried here in the Summer League, as second-round pick EJ Liddell suffered a frightening knee injury.

Liddell needed help getting off the ground and will undergo further tests to determine the extent of the injury. It’s the second key injury the Pelicans face now in Las Vegas, as first-round pick Dyson Daniels sprained his ankle earlier in the week.

Daeqwon Plowden also played well for the Pelicans on Monday, collecting 16 points and 6 rebounds coming off the bench.

For the Atlanta Hawks, first-round pick AJ Griffin has yet to play, but the Hawks’ second-round pick Tyrese Martin has played.

Against the Pelicans, Martin had 9 points on 4-9 shooting and 3 rebounds in about 24 minutes. It will be interesting to see if Martin gets one of the last spots on the roster this year for Atlanta or if he will be their second two-way player next to Chaundee Brown.

Speaking of Brown, he had 14 points, tying Justin Tillman for the team’s best score in that game.

Jabari Smith Jr., the No. 3 pick in this year’s draft by the Houston Rockets, has been a bit of a disappointment so far in the Summer League. However, Day 5 was his best performance yet as Smith recorded 19 points on 6-12 shooting and he also recorded 9 rebounds overall.

The story of Summer League for the Rockets was not Jabari Smith Jr. or fellow first-round pick TyTy Washington, but Tari Eason, who was selected No. 17 overall in this year’s draft by Houston.

On the other side of things with Jeremy Sochan out for the Summer League due to recent illness, fellow rookies Malaki Branham and Blake Wesley continued to carry the load for the San Antonio Spurs.

Branham finished that game with a team-high 20 points on 8-18 shooting and Wesley finished the game with 14 points, 6 rebounds and 4 assists.

The Boston Celtics are looking for depth in the Summer League this offseason and they may have already found some ahead of the 2022-23 season.

Sam Hauser is a sharpshooter who scored 12 points on a 3-7 shot against the Milwaukee Bucks in that game and Matt Ryan continued to make a name for himself, scoring a team-high 23 points off the bench .

Former first-round pick Mfiondu Kabengele continued to impress as a keen rebounder, finishing with 15 points and 11 rebounds, including 7 on the offensive side of the floor.

For the Bucks, last year’s draft pick and current two-way player Sandro Mamukelashvili continued to play well, scoring 28 points on 9-19 from the floor in that game. Mamukelashvili also had 9 rebounds in this game.

Lindell Wigginton also played well off the bench for Milwaukee, as he finished the game with 24 points on an 8-13 shot.

As for this year’s draft picks, JD Davison had just 5 points and 6 assists for Boston and first-round pick MarJon Beauchamp had 15 points for Milwaukee.

Chet Holmgren, the No. 2 overall pick in this year’s draft, has quickly become a fan favorite in the Las Vegas Summer League and for good reason. Between his length and his ability to impact the game in different ways, Holmgren has proven himself to be one of the best players in this year’s draft class.

Against the Orlando Magic on Monday, which was playing without Paolo Banchero, Chet Holmgren finished with 16 points, 10 rebounds and 2 blocks.

Sophomores Aaron Wiggins, Tre Mann and Josh Giddey each had 12 points in the game for the Oklahoma City Thunder.

Without Banchero, the Magic spread the ball to the offensive side of the floor and got much of their production from two guys on their bench.

Justin James (16 points) and Tommy Kuhse (14 points) combined to score 30 points off the bench for the Magic and Zavier Simpson continued to impress from the backcourt.

Simpson finished that game with 11 points, 3 rebounds, 7 assists and 5 steals. A very versatile player who can be used as a main facilitator, it would be surprising to see Zavier Simpson remain without a contract after the end of the Summer League.

The Dallas Mavericks didn’t have a first-round pick in this year’s draft, but they ended up taking a first-round ranked prospect with the No. 37 overall pick in the draft.

Jaden Hardy has proven to be a strong-witted, “first-scoring” shooting guard and in the Summer League has looked like someone who can make an immediate impact on the game for the Mavs.

Against the Utah Jazz on Monday, Hardy had 14 points, 6 rebounds and 5 assists. In the end, he couldn’t lead Dallas to a win, as the Jazz barely got the win.

The game’s top scorer was Jerrick Harding, who finished with 18 points on 8-14 shooting off the bench for the Mavericks.

Overtaking the New York Knicks 49-30, the Portland Trail Blazers were able to close Day 5 of the Summer League with a double-digit win.

Trendon Watford led the way for Portland with 18 points and 6 rebounds, as second-round pick Jabari Walker really impressed on the rebound.

Walker finished the game with 16 points and 13 total rebounds for the Trail Blazers. Keon Johnson, the 21st overall pick in the 2021 NBA Draft, had 11 points on 3-9 shooting.

Trevor Keels, the New York Knicks’ only draft pick this year is yet to score in double figures in the Summer League, as he had 8 points and 5 rebounds against the Trail Blazers.

The biggest winner in Day 5 action was featured in Game 1 of the day between the New Orleans Pelicans and Atlanta Hawks.

Trey Murphy III showed flashes of his full potential in the Summer League last year, as well as during the 2021-22 regular season. Now Murphy looks much more comfortable and confident in this year’s Summer League.

Scoring 23 points in the Pelicans’ opener in Las Vegas this summer, Trey Murphy III scored 30 points on 10-18 rushing shots, 3-6 from three-pointers. He also finished his day with 6 rebounds, 1 steal and 1 block.

Standing at around 6ft 8in with a wingspan of almost 7-1, Murphy ticks all the boxes to be a difference maker going into the 2022-23 season, especially since he is a very high shooting threat. at the perimeter.

If things can start to click for him defensively, Murphy could very well move up the Pelicans’ depth chart and be their young star of the coming year, the same way Herb Jones had a breakout rookie campaign. .