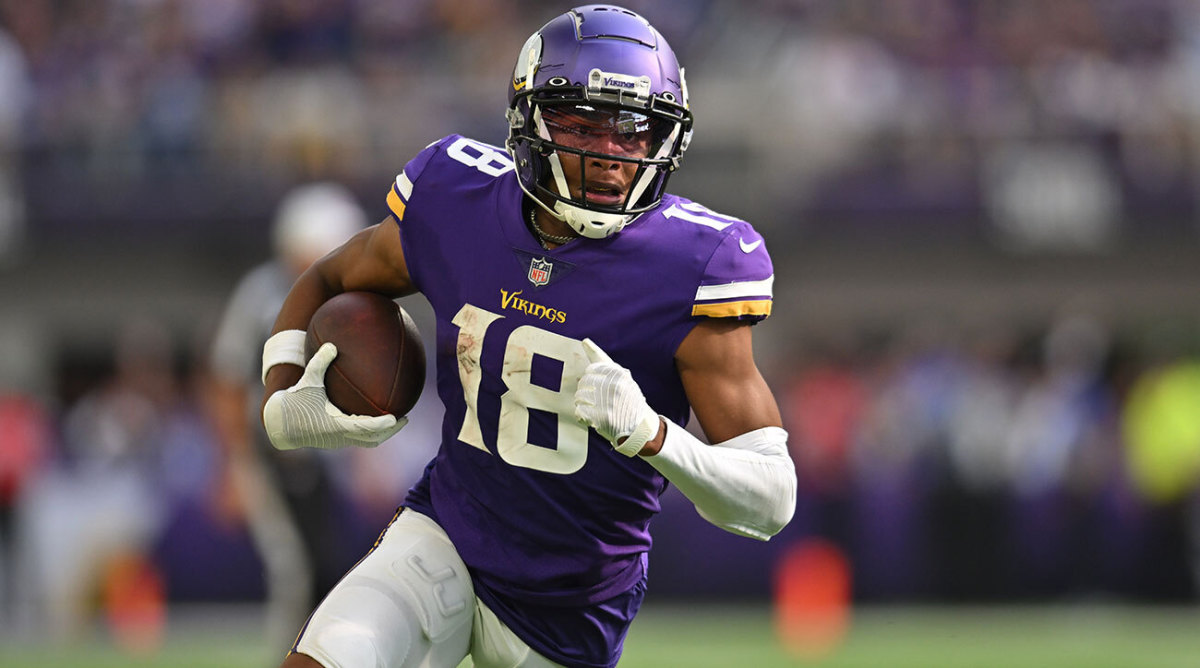 Week 1 of the NFL schedule is almost in the books (we still have Russell Wilson against his former team on Monday night football) and the best performances deserve to be recognized by our MMQB staff. Even if you’re feeling down because your team didn’t win, maybe one of your favorite players will be awarded a ball by our staff.

Conor OrrJustin Fields. I am infamous on Bears Twitter for my repeated pleas for Fields to escape from Chicago. That said, he played a heroic game on Sunday that means little in terms of large-scale takeaways, but highlights his versatile skills. With Soldier Field resembling a pre-Revolutionary battle swamp, Fields made a few pitches, created a few plays, and upset one of football’s greatest teams.

Mitch GoldichAJ Brown. A slightly homegrown pick of the MMQB native Philadelphian, but who cares? Making his Eagles debut, Brown caught 10 of Jalen Hurts’ 18 completions for 155 of 243 passing yards. Brown had 128 yards before half time. It’s been a long time since the Eagles had that kind of No. 1 receiver, and his presence will transform what they can do on offense. There was a lot of talk last year about the team’s dedication to the season-transforming running game, but having Brown raises the team ceiling significantly. I don’t want to overreact to a Week 1 win over the Lions, but seeing him fit in so perfectly was a really encouraging sign of what was to come.

Gary Gramling: Saquon Barkley. I’m not running a GoFundMe for Barkley, but it’s not easy being a running back heading into a contract year after spending the first four seasons of his career frequently injured and often misused by some , uh, less than innovative offensive coaches. Sunday in Nashville, Barkley was the kind of difference maker (18 carries, 164 yards, TD; six catches, 30 yards) many thought he could be when he entered the NFL. The Giants stole a win, and somewhere Dave Gettlemen pantomime as he enters numbers into a spreadsheet and laughs maniacally.

John PluymPatrick Mahomes. No Tyreek Hill. It doesn’t matter that you’re Patrick Mahomes and your coach is Andy Reid. What a performance from Mahomes against the Cardinals. Mahomes was 30 of 39 for 360 yards and five touchdowns. The Chiefs overpowered the Cardinals and it was never close. Mahomes has now thrown 46 touchdown passes and three interceptions in 14 career NFL games in September, and won 12 of those games. Now it’s Mahomes vs. Justin Herbert and the Chargers on Thursday Night Football. AFC West is going to be a fight till the end and Mahomes and Herbert should put on quite a show for football fans.

Bill EnrightJustin Jefferson. Towards the end of August, fantasy football players began recruiting Justin Jefferson ahead of Cooper Kupp. Audacity! Kupp is the reigning NFL Offensive Player of the Year, led all receivers in receptions, yards and touchdowns and had one of the greatest fantasy seasons in history. So when Kupp turned in a stellar performance on Thursday night, those who selected Jefferson ahead of him in the drafts had eggs in their faces. But when the Vikings point guard took to the field on Sunday, he dazzled. Jefferson hit the griddy twice with two scores to go along with nine catches for 184 yards.