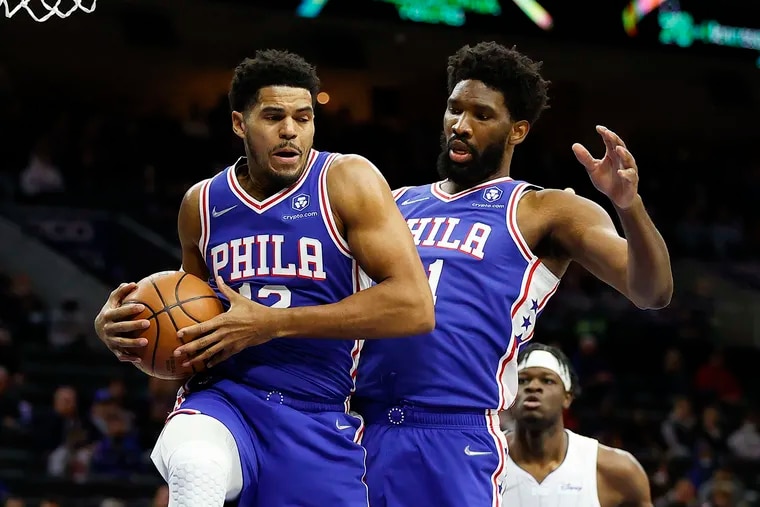 At this point, it’s as if COVID-19 has become an insidious habit that we’ve fallen back into. Marlboro reds. Johnnie Walker Black. Dessert at midnight.

We can’t seem to help each other. We can’t seem to resist. We cannot bring ourselves to wear masks in Wawa, where it is not mandatory but recommended. We don’t seem to understand that when the Pennsylvania Supreme Court overturns the governor’s mask mandate for schools, that means COVID will continue to haunt the halls for many more months to come.

We fail to convince ourselves that half-done adherence to common sense protocols yields half-baked results. Why? Because we favor “personal freedoms” over the common good. And therefore, we cannot have beautiful things.

In this case, it means more postponements in the world of sport. More recently, that meant the Sixers’ home game against New Orleans would not take place on Sunday night after Andre Drummond and Shake Milton joined Georges Niang in COVID protocols. It was one of five NBA games originally scheduled between Sunday and Tuesday that were canceled. New players bring the number of Sixers who have been affected by COVID this season to seven; Joel Embiid, Tobias Harris, Matisse Thybulle and Isaiah Joe were out earlier.

The NHL has postponed 10 games, starting last weekend, due to COVID outbreaks among players in Toronto, Boston, Vancouver and Nashville. The Bruins and Predators are closed for a week.

The NBA, NHL and NFL have returned to stepped-up measures to mitigate the spread, but this horse has long since left the stable. Why not ? The leagues left the barn door wide open.

It made no sense to relax protocols in any league where players and staff talk, sweat, spit and vent in common places. But, you know, the freedoms.

So here we are. Merry Christmas.

Three NFL games have been rescheduled from last weekend to Monday and Tuesday night, including the Eagles’ home game against Washington, moved from 1 p.m. Sunday to 7 p.m. Tuesday. It happened after 23 players from Washington entered COVID protocols, the first among them Montez Sweat, who is not vaccinated. The NFL had policies in place to absorb even a mass epidemic like this, but ignored them, in typical and arbitrarily unfair NFL style – a move that particularly hurt the Eagles.

To be clear, all games should have been played as planned, as the NFL promised before the start of the season. The workforce existed. The medical community has predicted more easily transmitted coronavirus variants, and Omicron has arrived just in time. But, to maximize the money with three free prime-time games, the NFL has sacrificed safety for money: playing for short weeks at this point in the season is wreaking havoc. Human bodies aren’t built for 17-game seasons in the NFL, let alone 17-game seasons with less than six or seven days off.

If the NFL and NFLPA really cared about player safety, they would have agreed to impose vaccines and recalls for all players. All leagues would reinstate the strictest protocols for everyone, including daily testing, social distancing and mandatory indoor masks, no communal meals, virtual meetings, no travel shenanigans and dieting. home-work-home for all players and coaches. They would enact protocols banning holiday gatherings and enact them now.

These types of measures worked in 2020. They will work again.

It’s as simple as that.

Keep players at the hotel on the road, no visitors, no restaurants, no taxis, no Ubers. Test, then plane, then hotel, then test, then arena, then plane; rinse, repeat. It stinks, yes, but this is the route we chose.

We have become lax. We have become lazy. We are faced with a version of the disease that travels more easily than Gary Player. Omicron may be less deadly than Delta and the original virus, but the United States still averaged more than 1,200 COVID deaths per day last week. The most disastrous projections, called for by the Centers for Disease Control, predict nearly 3,800 deaths per day in a month. We have already reached 800,000 deaths in America, by far the highest number in the world, as we wallow in an unvaccinated pandemic, where unvaxxed victims are about five times more likely to die than their fully vaxxed counterparts.

It won’t be a good year.

As tiring as it can be to keep masking yourself, getting bitten, washing your hands and staying away, it is far more annoying to pretend these measures are ineffective. There is no argument. Stopped.

And no, no one is perfect.

With me, we don’t camouflage ourselves all the time, everywhere, but we are doing pretty well. My kids go to schools without masks, but they wear masks in class and in hallways because they don’t want to get sick and miss sports or school. Last week, we declined an invitation to an ugly sweater party. We also canceled our annual New Years Eve party for the second year in a row, partly because the Philadelphia Health Commissioner recommended it, and partly because we didn’t want to ask people for the shots. or test to attend.

Yeah, it’s a chore. Like you, I know people who have had strong and frightening reactions to the vaccine, but they are by far the exception. Either way, getting the vaccine is much safer than getting the disease – heart and fertility problems are most likely more likely to result from COVID than from the vaccine, and getting the COVID vaccine makes you much less susceptible. to get it and spread it.

It’s all exhausting: evolving knowledge, changing protocols, brain-dead arguments. But that’s what it is.

And that won’t go away until we, the leagues and unions all do the right thing.