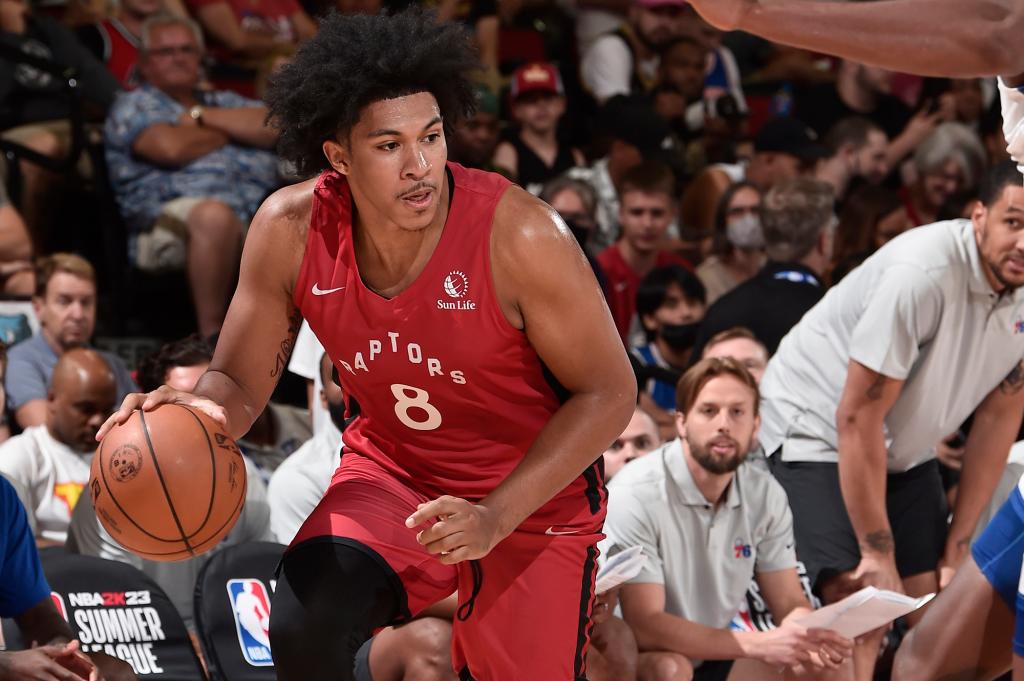 LAS VEGAS — It became a reality on Saturday: Ron Harper Jr. is an NBA player. The son of the five-time NBA champion made his Las Vegas Summer League debut, fulfilling a lifelong dream that seemed unlikely for much of his life.

“It was good to go out there and get my feet wet,” the 6-foot-6 Harper said after scoring seven points and adding five rebounds and two steals for the Raptors in a 97- 77 against the 76ers on Saturday. “You have to go there to work the nerves for sure. This is your first NBA action in front of the world. I felt like I played well. »

There were some early jitters for Harper. The Franklin Lakes, NJ native, who has a two-way contract with Toronto, didn’t have many touches early on and turned the ball over in transition.

He got his first points in the second quarter after following his own failure and reaching the free throw line. He sank his first shot from the field in the third quarter, a 3-pointer into the left corner, then rounded a defender nicely a few possessions later for a bank shot.

Raptors summer league coach Trevor Gleeson thought Harper was nervous at first but got better as the game progressed. The Raptors had a scrum Thursday and Gleeson said Harper was their best player that day.

“I’m definitely convinced that I belong,” Harper said. “I know my place is here.”

For Harper, even being in this position is an accomplishment in itself. He was a little-regarded three-star recruit coming out of Don Bosco Prep in New Jersey, and now finds himself in the NBA. He had a famous last name, but little hype behind it. At Rutgers, under coach Steve Pikiell, he methodically established himself as one of the best players in the Big Ten.

His fourth and final year at Rutgers was his best. He produced career highs in points (15.8), assists (1.9), 3-point shooting (39.8) and free throw percentage (79.5). He led the Scarlet Knights to back-to-back NCAA Tournament appearances for the first time since 1974-75 and won the Haggerty Award, given to the region’s top homegrown player, the first Rutgers player to win the honor since Quincy. Duby in 2006.

Now he still has to prove himself. He started doing this by getting in better shape and eating better. He is visibly trimmer.

“That’s been the biggest thing for me this summer, educating myself on how to eat right, what to eat, how much to eat,” Harper said. “It really carried me on this journey. Before, I felt like it was something I was missing. Now I understand very well what I have to do. »

Harper was hoping to be drafted, but even though he wasn’t chosen, he ended up with a franchise known for its development. The Raptors have turned unsung prospects, such as Fred VanVleet and Norman Powell, into solid NBA players. Harper hopes to be Toronto’s latest success story.

“I really feel like I fit in well with the organization,” he said. “We’ve been working with them for a few weeks now and it’s only been positive things. … I’m happy to be here, I’m happy to be a part of it and I know my best basketball is in the future.