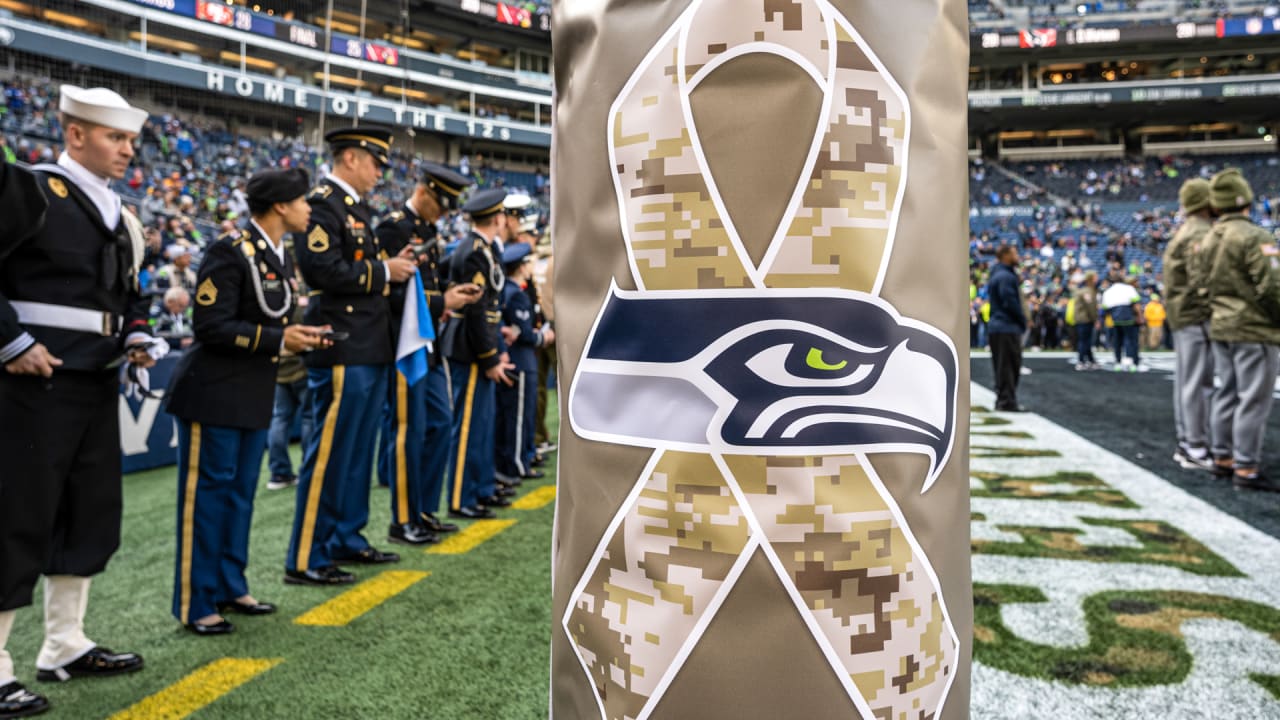 Seahawks Salute to Service Honorees will include:

Flag runner: Bringing the American flag out of the tunnel will be U.S. Army Staff Sgt. Erica Myers. SSG Myers currently serves at Joint Base Lewis McCord, where she is an operations advisor with C Troop, 3rd Squadron, 5th Security Forces Assistance Brigade. A natural athlete, SSG Myers was captain of the Army Women’s Rugby Team for two years and was named US Army Female Athlete of the Year. SSG Myers joined the military in 2011 and is from Louisiana.

National anthem: The national anthem will be sung by US Air Force veteran Keisha Gwin. As U.S. Ambassador and Air Force musician, Gwin has deployed to Southwest Asia three times in support of Operations Iraqi and Enduring Freedom and Operation New Dawn. She also served aboard the US Navy hospital ship “Comfort” as part of a joint humanitarian deployment to Central and South America. She retired from the Air Force in August 2017 after 20 years of service.

12 Flag raising: The 12 Flag will be hoisted by Alfie Alvarado-Ramos. Born in Puerto Rico, Alvarado-Ramos served 22 years of active service before retiring as command sergeant major of Madigan Army Medical Center and troop command at Joint Base Lewis McCord. She is currently the director of the Washington State Department of Veterans Affairs, the statewide advocate for benefits and services earned by veterans. She is a recipient of the Legion of Army Merit Medal and the Military Order of Medical Merit.

Salute to Service Moments, Presented by USAA: The team will present four moments of service tribute throughout the game. In the third quarter, the team will recognize the service of Dr Diana Ross-Jackson, mother of Seahawks LB Carlos Dunlap II. Dr. Ross-Jackson proudly served in the United States Army Reserve for 11 years. His main specialty was a 91E (dental specialist). She received specialized training necessary to assist military doctors in examining and treating members of the military service. While on duty, Dr. Ross-Jackson also qualified at sniper rate. After being blessed with two children, Bianca and Carlos Dunlap, she received an honorable discharge for the time she served.

Hi to the non-profit service: Throughout the month of November, the Seahawks will be raising funds for brigade assistance dogs. Based in Bellingham, Wash., The organization provides trained service dogs to veterans, children and adults with physical, developmental and behavioral health challenges to promote more independent and enriched lives. In the first trimester, a local family will be introduced to a service dog specializing in serving children with autism. Throughout the month of November, the Seahawks Pro Shop will also donate 12% of sales of Seahawks Salute to Service merchandise from in-store purchases to Brigade assistance dogs, as well as taking donations at the checkout.

Prior to kickoff, the Seahawks will also feature a special military challenge coin, designed and created by the USAA, for use in the official coin toss. In what has become a long-standing tradition, Challenge Coins are given by one member of the military to another to reward or encourage excellence, boost morale, or recognize a sibling in arms. The Seahawks partner with the USAA to host military events throughout the year, including the annual team “change of command” ceremony to recognize an honored military unit. This season, the USAA and the Seahawks welcomed its 2021 honored military unit – Naval Air Station Whidbey Island (NASWI) – in a handover ceremony in September with the United States Coast Guard District 13 (the honored military unit Seahawks 2019/2020). The Seahawks’ trademark “12 Flag” has been transferred between the two units, signaling a “change of command”. This is the ninth year that the USAA has teamed up with the Seahawks to adopt an honorary military unit.

Founded in 1922 by a group of military officers, USAA is a leading provider of insurance, banking, and investment and retirement solutions to 13 million U.S. military personnel, veterans who served honorably and to their families. Headquartered in San Antonio, Texas, USAA has offices in seven US cities and three overseas locations and employs more than 36,000 people worldwide. Each year, the company contributes to national and local nonprofit organizations to support military families and the communities where employees live and work. For more information on USAA, follow us on Facebook or Twitter (@USAA), or visit usaa.com.