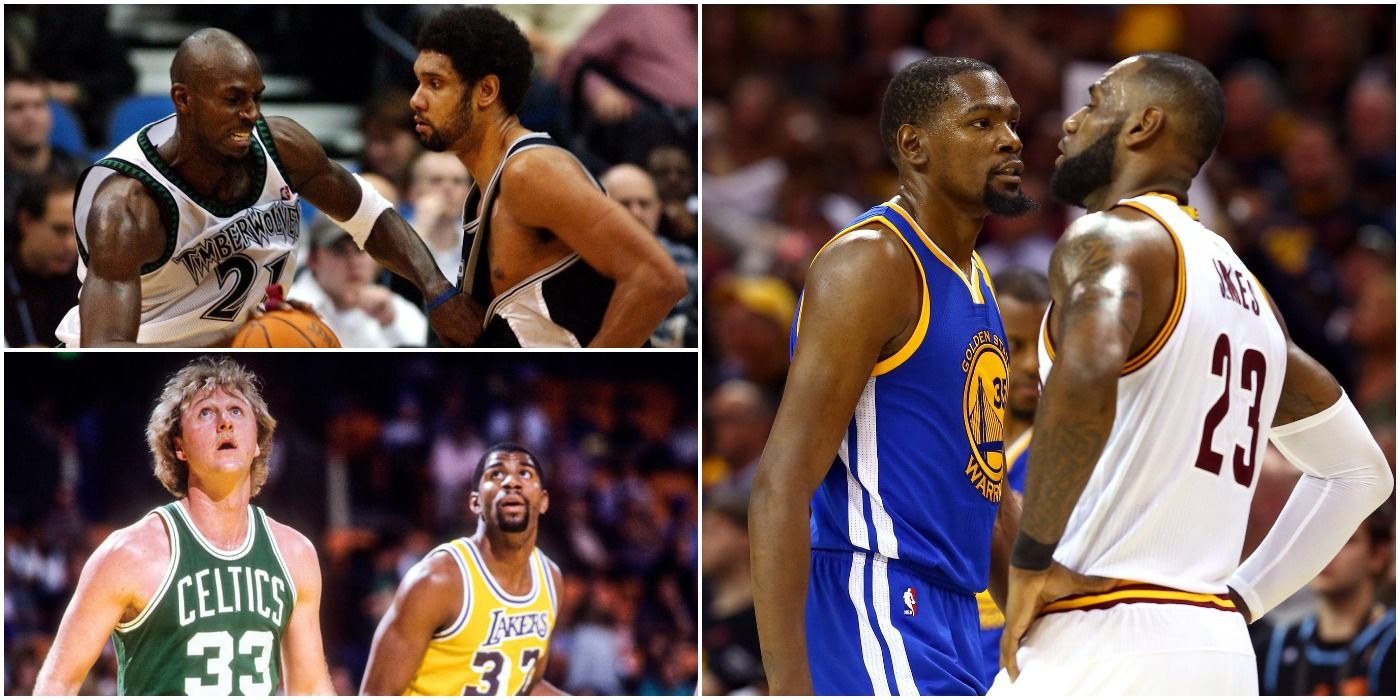 Every big NBA the player has/had a big rival right next to them. While Michael Jordan went down in history as one of the greatest to ever step on the court, he wouldn’t be seen in the same light if he wasn’t constantly tested by other All-Stars and big leagues.

Jordan had his fair share of rivals in the NBA. However, the former Chicago Bulls isn’t the only big name player to have a rival running them. Let’s take a look back in NBA history and see the ten greatest player rivalries to ever step on the court.

Russell Westbrook and Kevin Durant were once the league’s greatest duos. However, when the latter decided to leave for Golden State via text message in 2016, after telling his former teammate that he would stay, the rivalry between the two began.

These two have had intense battles on the court every time they faced each other, even having a few shoving matches and almost fighting on the court. The only thing holding this rivalry back was the lack of a post-season meeting between their two teams.

Shaquille O’Neal’s career was ending while Dwight Howard’s was just beginning. Funny enough, the beef between the two began after the latter used a Superman costume in the 2008 dunk contest. O’Neal, having used the moniker before, felt slighted.

The two still have a rivalry today, with the retired player taking every chance to poke fun at the Lakers center. At this point, O’Neal and Howard have been going strong for nearly 15 years, despite the fact that one is retired and the other likely will be soon.

This beef is incredibly odd considering the numbers involved. Kevin Garnett is one of the best talkers to ever step on the court, while Tim Duncan is more of a silent player. The former Boston Celtic always did his best to get something out of his great compatriot, which he rarely did.

However, Duncan would admit that he sometimes pushed the bear when he was playing Garnett, which worked. These two had a big rivalry on the court, like two of the greatest big men of the 2000s.

Russell Westbrook is one of the stars of the NBA. He is a former MVP and All-Star, and will undoubtedly go down as one of the best to ever step on the court. With all these accolades, one would expect him to have a bigger rival than Patrick Beverley.

For some reason, these two fight almost every time they’re on the field. The beef between them began in the 2013 playoffs, when Beverley injured Westbrook, causing him to tear his meniscus. Since that injury, the two have been at each other’s throats.

Michael Jordan’s beef with Isiah Thomas has been one of the most important rivalries of his career. The two met several times in the playoffs as the Bulls looked to continue their dominance, and the Pistons were the biggest threat to them.

While many may have only seen a competitive rivalry between the two, Jordan also really hated Thomas off the pitch. The former MVP reportedly once demanded that the Pistons-Great not be allowed on the notorious 1992 Dream Team.

These two were arguably the greatest duo in NBA history as they won multiple championships for the Los Angeles Lakers during their time together. However, by the end of O’Neal’s tenure in Los Angeles, the two were at each other’s throats.

When O’Neal left LA, he dropped Bryant in the media, to which the latter responded in the same way. The only thing these two lacked was a great post-season streak. Luckily, they reconciled and became friends before Bryant’s tragic passing in 2020.

LeBron James has had many rivalries, but none were bigger than his beef with Kevin Durant. While these two haven’t had too many problems off the pitch, they have an intense and clear rivalry on the pitch, as arguably the two best players in the league.

These two have met several times in the playoffs and the NBA Finals. Durant currently holds a 2-1 advantage over James in the Finals, as the Golden State Warriors outscored the Cleveland Cavaliers in the 2017 and 2018 NBA Finals.

Larry Bird and Isiah Thomas have met several times in the playoffs, including in a great 1988 Eastern Conference Finals against each other. However, the real beef between them mostly off the field and started after the Pistons legend made some controversial comments.

Thomas once felt that if Bird wasn’t white, he’d just be another guy, which fostered a great rivalry between the two. The beef continued after their playing days. When Bird was hired to be Pacers GM in 2003, one of his first decisions was to fire Thomas, who was the head coach at the time.

Fans were lucky enough to see Bill Russell and Wilt Chamberlain perform at the same time. While the latter had standout stats, the former was a serial winner, winning 11 championships in his career.

It helped matters that the two faced each other regularly in the playoffs, as stars of the Boston Celtics and Los Angeles Lakers. While having an intense rivalry on the pitch, the two were actually friends off of it.

From one pair of great Lakers and Celtics to another. Magic Johnson and Larry Bird had a great rivalry during their time in the league, as the respective faces of the NBA’s two biggest teams. It helped things that they played three times against each other in the NBA Finals.

Johnson’s Lakers beat Bird’s Celtics two of three times, giving him the head-to-head advantage. While the two had a great rivalry while playing, they have actually become friends since retiring.