The NFL Brings the Draft and Its Business Opportunities to a City of Growing Importance: Las Vegas 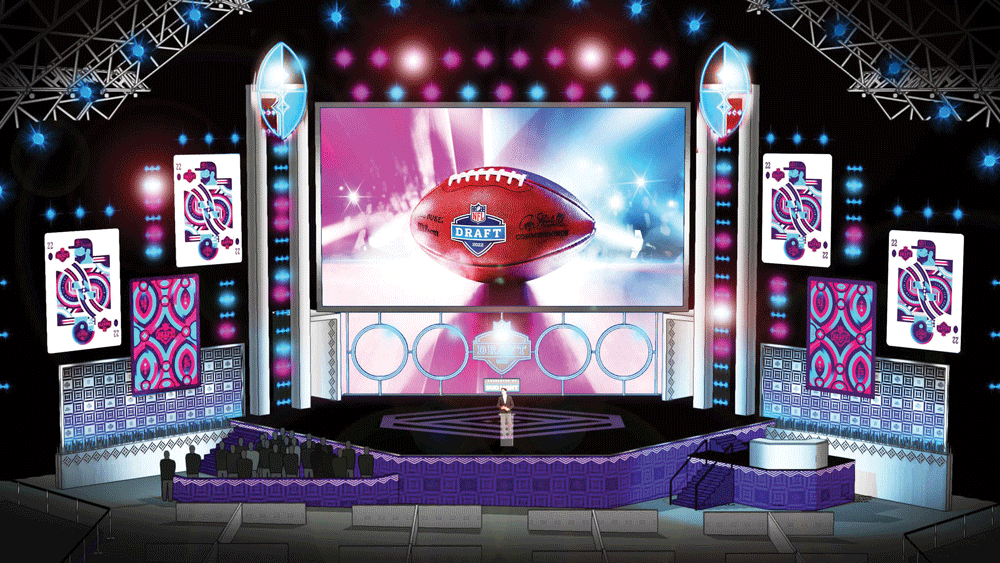 The scene will take place on land adjacent to Caesars Forum. Contrary to initial plans for the 2020 draft which was to be held in Las Vegas before the pandemic hit, no boats will be used to transport players through the Bellagio fountains.courtesy of the NFL

As the pandemic exploded in the United States on March 11, 2020, NFL Executive Vice President Peter O’Reilly walked into Roger Goodell’s office with words no one said lightly to the commissioner demanding “I’m not sure we’re doing that. [draft] in person.”

It wasn’t as big of a change as leagues had to shut down their active seasons, but the cancellation of the 2020 Draft Festival was a blow to the NFL’s ambitious plans in Las Vegas. That year’s draft was meant to be a glitzy introduction to the league’s new market, where the Raiders had yet to play a game.

Two years later, the NFL tries again in Sin City. But Las Vegas is no longer an experiment, having become the league’s most promising growth market. Since that day in 2020, the NFL has scheduled Super Bowl 2024 for Allegiant Stadium, signed three major sports betting sponsorships and opened a flagship retail store on the Strip. For their part, the Raiders made some of the brightest off-season talent deals, including bringing in wide receiver Davante Adams and point carrier Chandler Jones, both as free agents.

It’s a tremendous business opportunity for the league, its sponsors and its broadcast rights holders, as everyone looks to rise to the occasion.

“I think the big part of all the partners in Vegas is that they see the big picture,” O’Reilly said. “They see the bigger picture around major events. And that’s what the draft has become, this kind of pilgrimage event for the fans. Obviously, Vegas is a destination city.

NFL planners, local hosts, sponsors and broadcaster ESPN/ABC are hoping the frame itself will get a lot of buzz. On Thursday, 21 prospects attending the draft in person will take to the red carpet stage at the Bellagio Fountains, where divers began stage construction earlier this month. Then the action shifts to the draft and the NFL Experience on the vacant lots adjacent to Caesars Forum and behind the High Roller Ferris wheel and the Linq Hotel. C3 does the construction.

The draft marks a rare opportunity for Caesars Entertainment, the league’s sports betting and casino sponsor. Caesars Palace is a short walk from the project footprint, but other nearby corporate properties such as Linq, Harrah’s and Paris Las Vegas should also benefit. The NFL’s flagship retail store opened in the Forum Shops in January.

“It’s a gateway to all of our entertainment, fine dining and hospitality at our resorts,” said Andy Matheis, senior vice president of marketing strategy for Caesars Entertainment. “We love the opportunity to flex our muscles and come together for the whole city to do it.”

Caesars will activate across all of its properties and will be the first sportsbook operator to host an activation in the Experience Project, Matheis said.

Unsponsored casinos and resorts are also implicated. With the help of the Las Vegas Convention and Visitors Authority and the Raiders, the NFL staged a rough “takeover” of all the Strip marquees to create a cohesive look and feel. Additionally, Clark County commissioners authorized the longest traffic stop on the Strip yet for the project.

A change from the 2020 plan: the league scrapped plans to have players ride boats through the Bellagio fountains. The boats presented an “additional element of risk that wasn’t worth it,” O’Reilly said.

It will also be the start of Bud Light’s presenting rights to the draft, which is new as part of its expansion with the league that concluded in the fall. Subway will feature “Inner Circle” fan seating for 20 VIPs chosen by each club, and On Location Experiences, owned by Endeavour, has again sold VIP packages with premium seating near the stage.

The NFL will be looking to get things done in the draft. The League Executive Partner Summit will take place during the week at the Cosmopolitan, bringing together senior marketing executives from more than three dozen NFL sponsors and NFL CRO Renie Anderson.

Plus, O’Reilly noted, it’ll be something of a dry run for Super Bowl LVIII, awarded to Las Vegas only after the extension to a 17-game season created a scheduling conflict in Nova Scotia. Orleans. That means a shorter-than-usual prep schedule for a city that has never hosted a Super Bowl.

This will be the first NFL Draft west of Dallas, adjusting operational requirements to account for a three-hour time difference and hopefully attracting a large number of first-time draft participants as well as die-hards.

Hundreds of thousands of NFL fans will gather in a place synonymous with gambling, but O’Reilly says the NFL doesn’t view the draft as the next step in the sports betting journey. Las Vegas is a market that needs to grow in its own right, he said.

“Obviously those previous inflection points changed the world and the dynamic in general, but it really is a big fan market,” he said. “It’s a balance. This crowd that is going to be there, there will also be a lot of locals, people who come from all over the league. This is what the draft is, as well as the destination part.