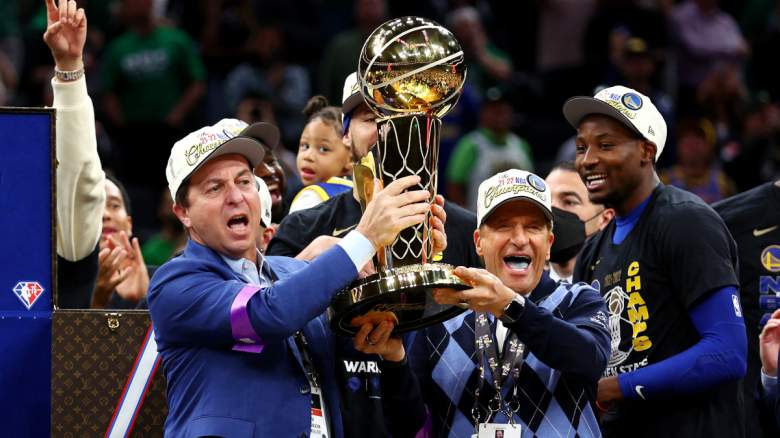 Golden State Warriors owner Joe Lacob isn’t a super popular guy in some corners of the hoops blogosphere; at least, that’s his reading of the situation. And it has everything to do with the investment he’s made in building a championship team.

“There’s a certain element out there that believes we’re ‘winning on the checkbook,’ [that] we won because we have the most salaries in our team,” the Dubs president told Andre Iguodala on the baller’s Point forward podcast.

Obviously Lacob would quibble with that claim, and it’s worth noting that aside from Andrew Wiggins, his entire Championship squad last season was made up of homegrown stars and minimal vet signings. That said, the Warriors have absolutely gone above and beyond what most clubs can even afford to do in an effort to keep the bandwagon going.

Whether we agree with that in principle or not, the fact is that Golden State can’t go on like this forever. You just have to ask Launderer’s reportit’s Zach Buckley.

B/R: The Warriors have already made tough choices in free agency

Buckley just dropped his list of the biggest questions facing each of the NBA’s teams going forward. With the Warriors, he chose to shine a light on the team’s incredible spending habits, noting — as others have — that what Lacob and Co. have done isn’t sustainable in the long run.

“It can sometimes seem like the Warriors are just printing money, but they don’t have unlimited funding,” Buckley said, while reminding fans that the team proved it just weeks later. winning the Larry O’Brien Trophy.

The hoops scribe continued, pointing out that the cap/tax crunch is far from resolved – and that even tougher decisions about players will have to be made in the not-too-distant future.

Will the Dubs Core be affected?

Buckley felt that “the 2023 offseason carries an ominous note” for Golden State, and it’s not just blowing smoke. As difficult as it was to see Payton — who was one of the most inspiring stories of the 2021-22 campaign for any team — move to Portland, the next few offseasons could be even worse for Dub Nation.

A decision will likely have to be made between Andrew Wiggins and Jordan Poole, who were both integral to the club’s title chase after the coming season. And even bigger names will enter the fray further down the road.

“The Warriors can’t afford to pay everyone – Klay Thompson will be a free agent in 2024 – so as the team spends the coming season chasing a championship, the front office will try to figure out which player (or players) is non-essential for future title pursuits.

Make no mistake – the Warriors are as well positioned as anyone with the veteran core they have in place and the cadre of talented youngsters they expect behind the scenes. But, at a certain point, you can only feed so many mouths, and the Dubs will have to start making those decisions sooner rather than later.