What a Hornets-Jazz trade involving Donovan Mitchell could look like 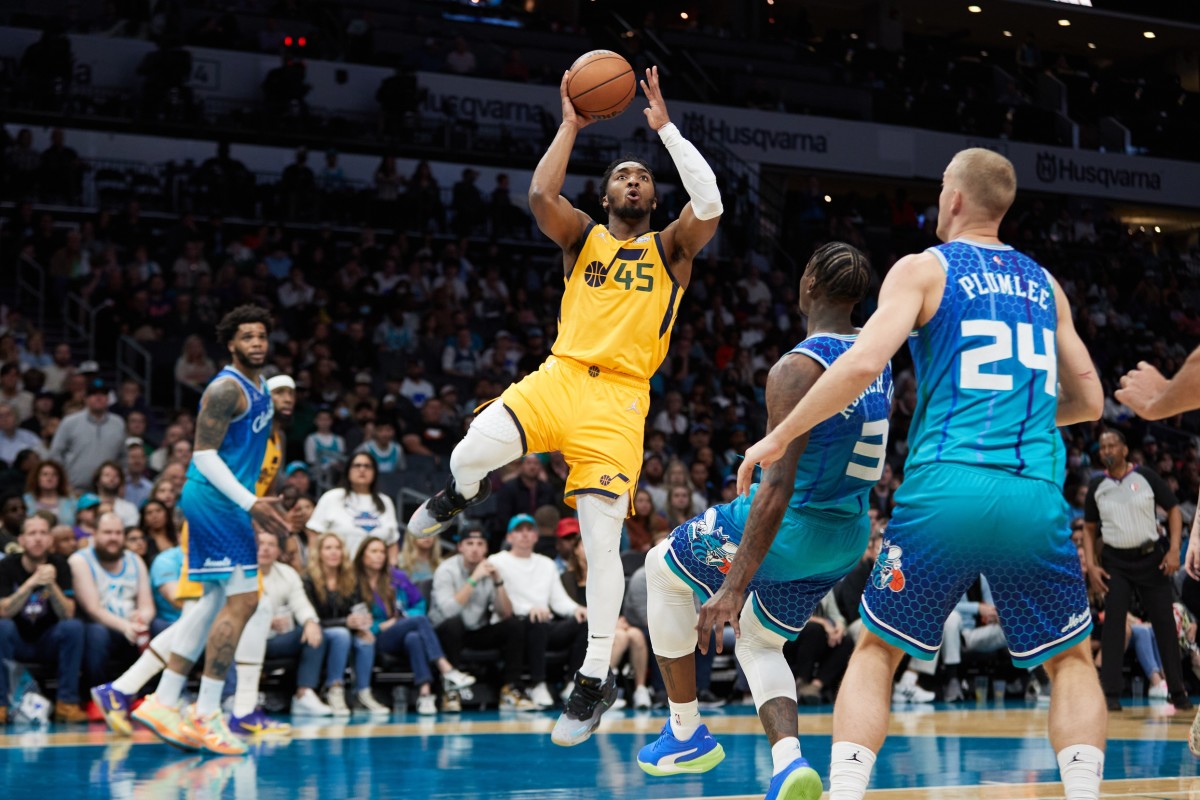 Alongside Kevin Durant and Kyrie Irving, Donovan Mitchell and the status of the Utah Jazz before the start of training camp in September remains one of the biggest titles in the NBA.

While the Utah All-Star guard hasn’t asked the team for a trade, the Jazz appear to be going through some sort of rebuilding or re-equipment process, leading many to speculate that Mitchell could follow All. -Star Rudy Gobert on the doorstep in a trade before the start of the 2022-23 season. Gobert was recently dealt to the Minnesota Timberwolves this offseason on July 1.

At present, Donovan Mitchell remains the face of the Utah Jazz, although several teams have already reached out to the Jazz in an attempt to trade him.

The New York Knicks remain strong favorites to eventually land Mitchell given his roots are in New York, but two new teams have recently been named as possible contenders for the All-Star shooting guard.

Charania: “There really isn’t any movement on the Mitchell front to the Knicks yet, but in the meantime, I’m told the Jazz are continuing conversations with other teams that are interested in Mitchell. Teams like Charlotte [Hornets] and washington [Wizards] I’m told, but overall throughout this process, the Knicks have been the focus of many concerns in the league, including the Jazz in regards to Donovan Mitchell…”

It’s certainly hard to believe the Charlotte Hornets have what it takes to pull off a trade for Donovan Mitchell, but they certainly have the credentials to make a statement before the start of the 2022-23 season.

Missing the playoffs after losing in the Eastern Conference play-off last season wasn’t so bad for Charlotte simply because they learned a lot about their roster. LaMelo Ball took the next step in his career by becoming an All-Star for the first time, the Hornets found depth in Kelly Oubre Jr. and Cody Martin and, most importantly, Miles Bridges became a scoring option #2 top tier alongside Ball. .

The bad news for the Hornets this offseason is that Bridges may never play in the NBA again, as he faces one count of injury to parent of a child and two counts of child abuse in Reason to felony charges of domestic violence and child abuse.

Taking Bridges out of the equation now for the Charlotte Hornets, they remain very slim in terms of overall production. There’s not much LaMelo Ball can do for this team and a supporting cast of Terry Rozier, Gordon Hayward and a mix of young talent have what it takes to qualify for the playoffs in a Premier League Conference. ‘Is very crowded?

The simple answer here is a resounding “Nope,” that’s why President of Basketball Operations and General Manager Mitch Kupchak and that front office still have a lot of work to do to make the Hornets a real threat.

Pursuing Donovan Mitchell in a trade wouldn’t be easy, but the Hornets have a first-round pick every year through 2029 and they have a handful of young players who were recently drafted in the first round.

In addition to the young talent the Hornets could potentially offer as well as first-round picks, Mason Plumlee and Terry Rozier could be added to a deal with Utah to match Donovan Mitchell’s $30.3 million salary. for the 2022-23 season.

A trade package of Mason Plumlee, Terry Rozier, James Bouknight, PJ Washington and 3-4 first-round picks could very well be worth enough for the Jazz to resume in a trade involving Mitchell and from a salary standpoint. , the Hornets would send $40.7 million in combined salaries, more than enough to close this deal.

It’s entirely possible that if this were a proposed deal from Charlotte to Utah, the Hornets could request that former Sixth Man of the Year Jordan Clarkson be included in that deal with Donovan Mitchell, giving the Hornets two key backcourt talents to pair with LaMelo Ball and Gordon Hayward trying to make a playoff push into the Eastern Conference.

Who knows if the Jazz would even consider an offer from the Hornets, but that potential offer comes down to Charlotte’s willingness to sacrifice a large chunk of their future.

Going out and getting both Mitchell and Clarkson presents a path to victory for the Hornets. However, a move like this probably wouldn’t boost their championship chances too much.

LaMelo Ball, Donovan Mitchell, Jordan Clarkson and Gordon Hayward make for a strong core group, but the rest of this roster would be very young and unproven.

With teams like the Philadelphia 76ers, Milwaukee Bucks, Miami Heat and Boston Celtics leading the Eastern Conference standings right now and not going anywhere this coming year, it would be difficult for the Charlotte Hornets to really be a title threat.

For that reason alone, the Hornets probably won’t be willing to sacrifice much of their future for someone like Donovan Mitchell. That said though, we shouldn’t count on Charlotte to make another big leap for a notable name available on the trade market.

Miles Bridges production needs to be replaced somehow and all of this team’s future assets will go unused which is why Kupchak and Charlotte’s front office is definitely doing their homework right now to trying to come up with ideas on how to improve. in the 2022-23 season.